Anyone who knows me knows my dumpling cravings are insatiable. I could seriously eat them morning, noon, and night, seven days a week without a single complaint, partially because there is such a vast variety of delicious dumplings to satisfy every dumpling desire.

The second variety of dumplings I made that day was three-mushroom dumplings, containing a combination of dried shiitake, cremini, and oyster mushrooms, all wrapped in a delicate, translucent wheat starch wrapper and steamed to perfection.

With the exception of the oyster sauce in the filling (which can be swapped out for vegetarian stir-fry sauce) these dumplings are vegetarian, but feature a hearty filling that stands in for a meatier one in a pinch. Because they are made with wheat starch wrappers, they MUST be steamed before refrigerating or freezing. It does take a little extra time, but if you have more than one steamer basket to stack, it really only takes a couple batches to steam them all.

If you aren't able to procure wheat starch (you will only find it at Asian markets and online), you can definitely use the same filling with a basic flour-based dumpling dough and then either steam, pan-fry, or even boil them (to boil, just shape them into basic crescent shapes without crimping). In fact, the first time I made this filling, I used it for steamed dumplings using the basic dumpling dough--and can I just say, my dumpling-making techniques have come a long way since then! 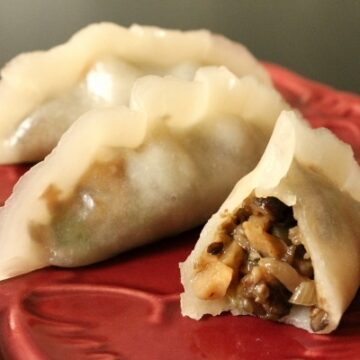