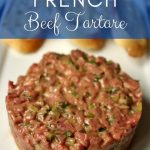 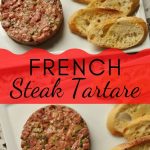 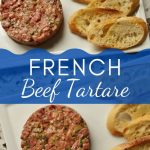 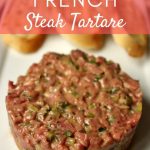 A French classic, Steak Tartare is a raw preparation of beef that is common in French bistros, brasseries, and cafes. It's easy to make, requires no cooking, and is best with a side of fries, a light salad, and/or toast points.

(This recipe was originally published in July 2019, but was updated with new photos and content in 2020).

Steak tartare, aka beef tartare, is a combination of hand-chopped raw beef, finely minced shallot/onion, capers, and cornichons, all tossed in a tangy and acidic Dijon mustard-based dressing. Recipes often include egg yolks in the dressing, or place whole egg yolks atop each serving.

There are many recipes for this dish throughout the internet, and in essentially every French cookbook. There are of course similarities and some differences, from the cut of beef to the slight variations in how the meat is seasoned.

The late great Anthony Bourdain's recipe in the Les Halles Cookbook includes ketchup, anchovies, and Cognac, which I did not see in any other recipe I came across.

How to make classic steak tartare

After much research I put together my own formula using a more traditional approach. Some folks use top round or sirloin for their tartare. You're best off using beef tenderloin if you can afford it.

My local meat market sells it for $10.99/lb (as of early 2020) which is very reasonable for this top cut. The first step for making steak tartare is to briefly freeze the beef tenderloin so it slightly firms up. This will make it much easier to hand chop the beef into small pieces.

Meanwhile, prepare the other ingredients for the tartare. Finely chop cornichons, capers, parsley, and some shallot.

Once the beef is relatively firm on the outside but still easily pierced with a knife, remove it from the freezer.

Slice the tenderloin against the grain, then cut into matchsticks, and finally into tiny cubes about ¼-inch across in each direction. Combine the hand-chopped beef with the cornichon-caper mixture and the dressing.

How to serve beef tartare

Once the beef is evenly dressed, you may serve the tartare. Traditionally you can use a ring to shape the mixture into a patty. If you don't have a round cookie cutter or pastry ring, you can shape it free-form into a flat patty on a plate.

I find a 3 ¾-inch ring is a pretty good size for dividing the tartare into individual portions. Simply place the ring on your plate, pile a quarter of the mixture into the ring, and carefully press so it's even and flat on top. Then remove the ring. Voilà!

Serve your tartare with French fries, toast points (toasted crusty bread like a baguette is good here) and/or a light salad. I like slicing a baguette on the bias into ½-inch thick slices, lightly brushing or spraying with extra virgin olive oil, then toasting in a 375 degree F oven for about 10 minutes until crisp but not dried out.

This particular recipe is a bit more acidic than some others. I really wanted to replicate the highly acidic flavor of the steak tartare I enjoyed at Cafe Blanc in Paris. It definitely packs a punch, and that's what I like so much about it.

It's important to taste and adjust the seasoning to your liking once you combine everything. Of course as is the case with any raw preparation of meat, be sure to serve it cold and immediately.

If you don't have 3 other people to enjoy this tartare with you, you can definitely halve the recipe (I've done this). Use half an egg yolk (doesn't need to be super exact) or splurge a little and use the entire yolk for the 2 servings.

Do not plan to have leftovers. Steak tartare should be eaten immediately, not later or the following day.

Here's a fun idea for a variation. Add finely cubed gruyère cheese to your beef mixture! A friend of mine mentioned she enjoyed steak tartare at a restaurant with this unique twist, and tried it herself using my recipe and LOVED the version with cheese just as much as the original. I'm going to try it next time with cheese!

Have you ever eaten steak tartare before? Please leave me a comment telling me about your favorite version! And don't forget to rate this recipe if you've tried it. Thanks! 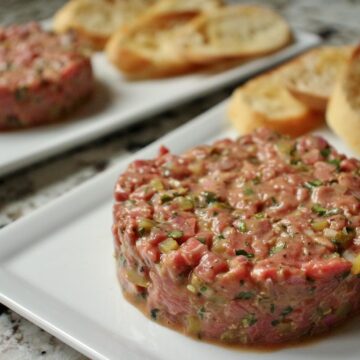