Lobster Rolls are the epitome of New England summer eats! This recipe features perfectly buttered potato rolls stuffed to the brim with fresh lobster salad. These homemade rolls are a fraction of the cost as what you'll pay at a restaurant, and just as delicious!

Kerber's Farm of Huntington, New York (on Long Island) has become a national brand through its products sold in stores such as Williams-Sonoma and Neiman Marcus, but its roots trace back to a simple farm and roadside country market first opened in 1941.

Over the years it's made an indelible impact on locals including Nick Voulgaris, who frequented the farm as a child, and purchased it in 2013 before it was converted into condominiums. In addition to Kerber's Farm products available nationwide, starting next week on September 17th The Kerber's Farm Cookbook will be for sale!

With this book in hand old fans and new will be able to recreate many of the beloved favorites on the Kerber's Farm menu including their lobster rolls recognized as one of the state's best by The New York Times, and even Oprah's favorite Kerberry Pie.

There are many mouthwatering, seasonal recipes within the pages of this beautifully photographed book. I have bookmarked several to try, including the decadent Mac and Cheese Pie, and the comforting Carrot and Chicken Soup.

Since it's still summer, I simply couldn't resist indulging in homemade Lobster Rolls featuring cool lobster salad studded with crunchy celery, served atop a bed of lettuce, and nestled in a buttered, griddled Martin's potato roll.

You can easily take a shortcut with your lobster rolls as I did, having your local seafood market or supermarket steam your lobsters for you if they offer this service. It was free for me, and I was relieved not to have to cook the lobster myself, which is not something I particularly enjoy doing.

I purchased a single lobster, and halved the recipe to yield 2 rolls. The result is a classic New England summer mainstay that pleases the palate, and will easily be a recipe I turn to in future summers when craving lobster.

The book itself is a seasonal treasure I plan to revisit throughout the year. I'm already looking forward to fall and the Apple Cider Pork Chops with Pear Sauce! The recipes are simple and approachable, with easy to source ingredients, making this an unpretentious farm-to-table cookbook ideal for all cooking skill levels. 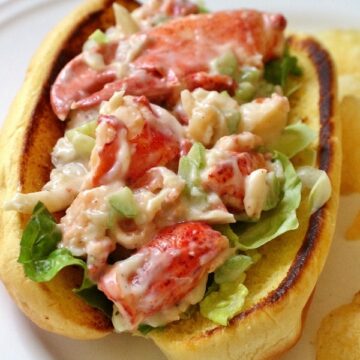 Adapted from The Kerber’s Farm Cookbook