There are few culinary delights in the world that make me as happy as indulging in fresh dumplings. I'm partial to Asian dumplings in particular, but truly I'm an equal opportunity dumpling lover.

I decided to simply roast them all in a 400 degree F oven for about 30 minutes, just tossed with a bit of extra-virgin olive oil, salt, and pepper. They were delicious and perfect, so I would do the same next time. The recipe below will showcase the original method.

Store-bought dumpling wrappers make this brussels sprouts and bacon dumplings recipe fairy easy to make. They're not only convenient but they have a nice texture when you pan-fry them.

The brussels sprouts and bacon filling for these dumplings is incredible. There is so much flavor there, and a wonderful mix of textures from the tender, slightly charred roasted sprouts and the crispy, salty bacon.

A bit of brown sugar, garlic, and vinegar in the filling really hit every note on your palate.

To these beautifully balanced brussels sprouts and bacon dumplings, add the unusual sounding, but strangely appetizing Fish Sauce Caramel as a dipping sauce and you have a fantastic creation! Its sweetness is actually a wonderful pairing to the savory dumpling filling.

Considering how easy these dumplings are to make, especially by simply roasting the sprouts and also utilizing store-bought wrappers, I can see myself making them on a whim in the future.

They were hugely popular by those who tried them, and I already have requests for a repeat. I actually halved the recipe with plans to make 30 dumplings, but I ended up with 24. 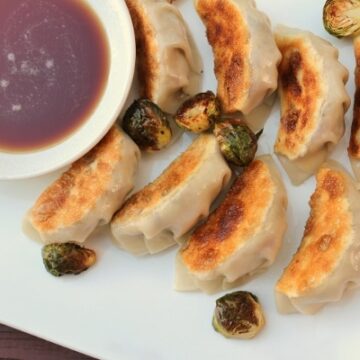