These completely from-scratch Vegetable Dumplings are out of this world delicious! The healthy filling packs a flavor punch, while the homemade dough yields an amazing crispy and chewy texture when pan-fried.

I love love love dumplings and dim sum. I can honestly say that I haven't met a dumpling I didn't like, and that includes non-Asian versions, like Armenian manti and Polish pierogies. There is a world of dumplings out there, and my life goal is to eat my way through it (not a bad goal, huh? hehe). Most people use store-bought dumpling, wonton, and spring rolls skins to make Asian dumpling creations in their home kitchens.

It's a wonderful convenience that saves a lot of time. I am an elitist, however, and enjoy the flavor and texture of homemade skins so much that I will go out of my way whenever possible to make them myself. It makes a world of difference and I highly suggest that you try it at least once. Much like fresh pasta versus dried, the texture of the homemade skins is exponentially better than their dry counterparts, which require water or egg to seal and never yield that toothsome, slightly chewy texture that one finds in dumpling houses. In the end, it's just not the same.

Another thing I really love about dumplings, and dim sum in particular, is the variety you can achieve in one meal. Going to a dim sum house gives you an incredible selection of foods, especially when dining with a larger party because you can order even more plates to try! At home, it is a lot easier to stick to just one recipe, as making the dough and filling, and then assembling and cooking it can take significant time depending on how much you want to challenge yourself. I apparently like to challenge myself a lot. In my first attempt to make dim sum, I made 4 different recipes! This time, I stuck with just 3, but it still took a great part of the day and required some advance work.

I made char siu (Chinese BBQ pork) from scratch a couple days before. It made enough to make 4 different recipes (depending on what you are making) and I froze some of the extras for future use. On the day of my dumpling adventures, I used some of the pork to make a char siu filling for baked bao (buns), which utilize a yeasted dough for their wrappers. I made the dough too, of course, and assembled and baked these off. The dough was fluffy and slightly sweet with a savory-sweet pork filling inside. I love the honey glaze brushed on top for extra shine and flavor. I made medium-size buns, and froze half of them for future use.

Both the char siu and baked char siu buns recipes were from an amazing cookbook called Asian Dumplings written by blogger and dumpling-maker extraordinaire Andrea Nguyen of Viet World Kitchen. She includes lots of wonderful dumpling-making tips on her sister site Asian Dumpling Tips. Her book is like an encyclopedia of Asian dumpling making, and includes versions from China, Japan, Korea, Thailand, India, Nepal, Tibet, the Philippines and more. The instructions are incredibly detailed, and are further enhanced by videos available on her website. Watch how to roll out dumpling skins here, and how to create some simple dumpling shapes used in the book here. There are even more videos and recipes on her website, but I highly suggest you check out her book for all the recipes! I'm seriously considering cooking my way through the entire book to really experience every last bite 🙂

The other recipe I made from her book, and the one I've chosen to share with you today, is for vegetable dumplings. In the book this recipe includes instructions for steaming the dumplings, but any of the fillings in the first chapter can be swapped for the different cooking techniques (boiling, pan-frying, and steaming). Although I love steamed dumplings, my favorites are pan-fried. On the West coast they are often referred to as potstickers, but on the East coast, and namely New York City, they are called pan-fried dumplings. "Potstickers" are for tourists 😉 The crust on each dumpling was amazing! It was audibly crisp, like a potato chip, yet perfectly balanced by the chewiness of the rest of the dumpling skin. Her suggestion to serve them with the crust facing up (or technically to the side) is vital in retaining the crisp texture.

I wanted to balance the meaty filling of the baked bao with something lighter and more vegetal, so this was an excellent pairing. These vegetable dumplings are vegan and full of flavor! Spinach, shiitake mushrooms, carrots, and pressed tofu (I found a small variety at Whole Foods) make up the bulk of the filling.

You definitely don't miss the meat at all! I froze half of these dumplings for future enjoyment, and I highly suggest you do too, or if you plan on serving them all at once, double the recipe and freeze a whole batch. It will be easier to make twice as much now than making it two separate times later on. When a dumpling craving hits, there is nothing better than a homemade dumpling on the fly to really satisfy.

I realize the recipe below is dauntingly long. Keep in mind that I had to put together several separate recipes in the book (dough, filling, assembly, cooking technique, dipping sauce) to make one cohesive recipe for you, my fabulous readers. You can easily make the dough and filling in advance, and can even assemble the dumplings hours before you plan on cooking them. Or better yet, freeze them and then partially thaw them just in time for a dim sum party. A little patience will result in dumplings that are far worth the effort and time 🙂

Check back later this week for more of my Dim Sum and Then Some series when I share an incredibly easy and delicious recipe for scallion pancakes from another dim sum cookbook I own and love, as well as a flaky and delightful char siu pastry recipe! 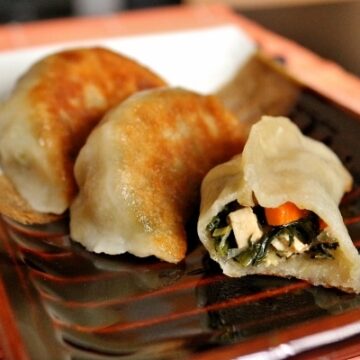