Inspired by the carrot dumplings at NYC's Buddakan restaurant, these veggie-filled Carrot Dumplings are as delicious as they are adorable!

I'm definitely one of those people who tries to recreate delicious things I try in restaurants. One of the dishes I really wanted to recreate were the carrot dumplings from Buddakan in NYC.

Not only do they feature a bright orange carrot-infused dumpling wrapper, and carrot in the filling (along with shiitake mushrooms and corn), but they're shaped like carrots! With little scallion carrot tops to boot! They're almost too cute to eat. Almost.

I knew I could make carrot dumplings wrappers by replacing the boiling water with just-boiling carrot juice. That was the easy part. And making the filling was pretty straightforward as well.

Buddakan featured shiitake mushroom and carrot in their filling, but also included some sweet corn for color and flavor.

I brought it all together with fragrant ginger, garlic, and a whole mess of delicious Asian embellishments. This included 2 different kinds of soy sauce, rice vinegar, and toasted sesame oil.

Shaping them took a little brainstorming. I knew that if I cut circles I could shape them into cones and thus into carrot shapes, but I needed to figure out exactly what size to cut them to yield the correct size dumplings with the proper shape (not too wide).

After a little trial and error, I resulted in the perfect technique. The mass of dough would be divided into 8 circles which would each be cut into 4 wedges and formed into cones/"carrots." It was a bit time consuming, but was absolutely worth the effort to yield these fantastic Buddakan-like results! 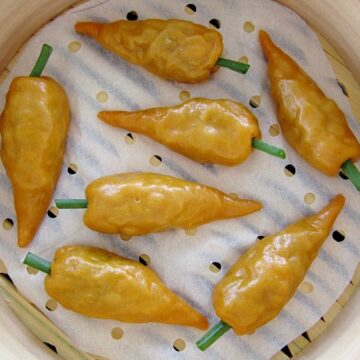 Inspired by those at Buddakan, dough recipe from Asian Dumplings