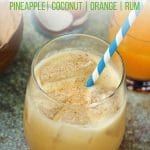 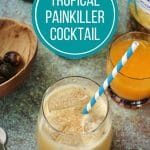 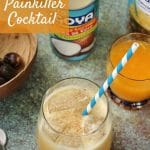 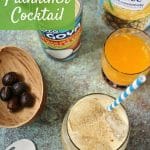 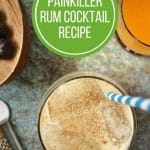 The Painkiller cocktail was invented at the Soggy Dollar Bar at White Bay on the island of Jost Van Dyke in the British Virgin Islands. It's the ultimate tropical drink whether you're beachside, poolside, or inside.

(This recipe was originally published in March 2016, but was updated with new photos and content in 2020).

In a sea of tropical drinks, the Painkiller cocktail is a personal favorite. It originated in the 1970's on the island of Jost Van Dyke in the British Virgin Islands. The Soggy Dollar Bar on White Bay still boasts its claim to fame as inventing this fantastic drink.

One of the best things about this recipe is that you don't need a blender, just a cocktail shaker. I often find blended drinks give me brain freeze.

The recipe for this Painkiller cocktail features a few of the same ingredients as a piña colada (perhaps the most famous tropical drink around). Unlike its cousin, the Painkiller is served on the rocks, and has the added luster of orange juice to balance out the flavors.

The Painkiller cocktail is actually the signature, trademarked cocktail of Pusser's Rum. If you don't have this brand of rum in your bar you can make this Painkiller recipe with another brand of dark rum. I have also made these with spiced rum which is not traditional, but extremely delicious.

Simplify your life with canned or bottled pineapple juice. If you have a fruit juicer and would like to juice your own pineapple the results will be fantastic!

You can also use freshly squeezed or store-bought orange juice. I don't drink orange juice on it's own so for me it's easier to buy an orange or two and squeeze them myself. Either option will work here.

Cream of coconut (coconut cream) is different than coconut milk. It's a much thicker and more intensely flavored ingredient. You really can't replace the coconut cream with coconut milk in this drink. It won't be the same. You want something thick and creamy to get the correct result.

Coconut cream is slightly opaque and runny (almost like a syrup consistency) at room temperature, but once you chill it it will be completely opaque white and thicker (more spoonable than pourable). If you have leftover coconut cream you can throw it in a blender with pineapple juice, rum, and ice and make piña coladas!

This Painkiller recipe features pineapple juice, dark rum, orange juice, and coconut cream. Freshly grated nutmeg is the final touch. I use nutmeg purchased from Grenada on a Southern Caribbean Cruise on the Disney Wonder.

The basic amounts for the drink are 4 parts pineapple juice, 2 parts rum, 1 part orange juice, and 1 part cream of coconut. It's easiest to measure out that number of fluid ounces, but you can multiply the recipe using this guideline to make bigger drinks.

Add your juices, rum, and coconut to a cocktail shaker filled with ice and shake vigorously. Pour it into a glass filled halfway with ice, and top with freshly grated nutmeg. You may also garnish with a pineapple wedge and/or an orange wedge or slice.

You can make a pitcher of Painkillers instead of shaking individual drinks if you plan on serving a crowd. Simply multiply the recipe by your chosen number of drinks. Just be sure to stir vigorously. Also stir again if the mixture sits for any period of time, because it will separate.

Tropical recipes to serve with your Painkiller 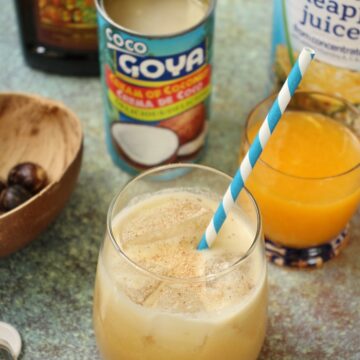 The Painkiller cocktail was invented at the Soggy Dollar Bar at White Bay on the island of Jost Van Dyke in the British Virgin Islands. It's the ultimate tropical drink whether you're beachside, poolside, or inside.
5 from 4 votes
Print Pin Rate
Course: Drinks
Cuisine: Caribbean
Prep Time: 5 minutes
Total Time: 5 minutes
Servings: 1 cocktail
Calories: 350kcal
Author: Victoria
Prevent your screen from going dark