As the Olympic party representative from China, these Har Gow (shrimp dumplings) were the perfect selection. First of all, they are the dumpling that many dim sum masters are judged by. They are the quintessential Chinese dumpling, if there ever was one. I have had the pleasure of making Chinese dumplings on several occasions in the past, and always look forward to exploring new versions.

Har Gow utilizes a different type of dough than all the other dumplings I have made in the past. Usually, I have used a flour dough for the pan-fried and steamed dumplings I have created. That dough yields a more opaque result, and is generally off-white in color. Wheat starch dough (which also includes some tapioca starch for suppleness) is stark white. If you've ever gone out for dim sum, you will recognize the white translucent wrapper from many of the dumplings on the carts. Some even refer to this style of dumplings as crystal dumplings because the wrappers glisten and are fairly translucent like crystals.

It was my first time making this style dough and I was a bit nervous. First of all, finding wheat starch was a pretty big challenge. Even at my local Asian market, I could only make off with tapioca starch, but no wheat starch. That finally came from a trip to Kalustyan's, a specialty market in NYC. I was also a bit anxious because unlike the flour dough, these wrappers would not be rolled out by a rolling pin, but rather pressed between greased plastic wrap with a flat heavy object. It just seemed so odd, I wasn't really sure what to expect.

For what it's worth, this dough was a lot of fun to work with. I enjoyed it even more than the alternative flour dough. It reminded me of the texture of Play-Doh and was very easy to manipulate. Pressing the dough was a lot faster and easier than rolling out the flour dough which is much higher in gluten and tends to retract and yield imperfect circles.

I was able to assemble these dumplings in a jiffy, whereas I expected it to take hours. Honestly, I'm sold! Although I love the flavor and texture of the flour dough (especially for pan-fried dumplings), I really love the wheat starch dough for its ease of manipulation (even if one of the ingredients isn't the easiest for me to find). Keep in mind that wheat starch dough is mainly used for steamed dumplings, so if you want to make fried, pan-fried, or boiled dumplings, you should plan to make the flour dough instead.

The shrimp filling was also a cinch to make (and really delicious!). Pork fat is a traditional addition to the filling. It adds a bit of richness, but it's definitely optional. I chose to keep my filling strictly pescatarian. I also included bamboo shoots, but water chestnuts would be a great source of texture as an alternative. As a matter of fact, I'm already planning on making another batch of these dumplings to utilize some of the extra bamboo shoots I have from the first batch I made. They were so easy that I simply can't resist! They freeze beautifully and are a great option to have on hand for dumpling cravings.

Check out all the Olympic Party posts here... 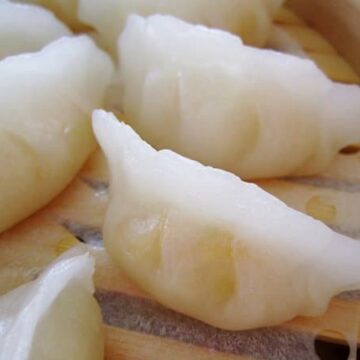