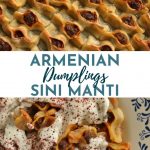 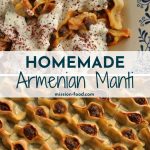 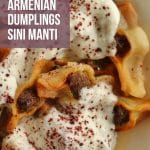 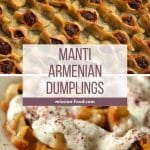 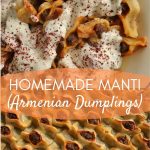 These homemade baked Manti (Sini Manti) are traditional Armenian dumplings. They feature a savory beef filling and a luscious yogurt-garlic sauce. While some recipes differ, using lamb instead of beef, this is my family's beloved version. It's by far the best I've ever had on two continents!

(This recipe was originally published in October 2010, but was updated with new photos and content in 2020).

Manti (mante) are dumplings common throughout the South Caucasus and Central Asia. They are made and consumed by different cultures including Armenians and Turks.

The concept of manti first reached Cilician Armenia through cultural interactions between Armenians and Mongols in the 13th century. Then Migrating Turkic-speaking peoples learned of manti from the Armenians and took it with them to Anatolia, where it became popular.

Nowadays with borders much different than those in the 13th century (and Armenia much smaller than it once was), manti is considered to be Western Armenian cuisine and is less prevalent in Armenia proper.

There are actually two kinds of Armenian manti. I have been making both varieties with both of my grandmothers since I was a young child! My favorite is the baked version (sini manti), but there's also a variation cooked in broth as a soup (sulu manti).

The dumplings for sulu manti is shaped differently (completely enclosed) and cooked in broth instead of baked in the oven. Sini manti are canoe-shaped open-faced dumplings which are baked until crispy, and then finished with a yogurt-garlic sauce and sumac, a tart Middle-Eastern spice.

Even amongst Armenians there are many nuanced variations to this popular dish, but this is the version I learned from my maternal grandmother. It can be labor intensive, but it definitely worth making from scratch.

And to prove it I was invited to Union Square Cafe in New York City to make this Armenian manti recipe for the staff for family meal. They all raved about it, and so will you!

For me, Armenian manti is king, however manti is also very popular in Turkey where it's prepared a bit differently. Turkish manti is shaped into small dumplings that kind of resemble pyramids, with four corners on the bottom and pinched closed at the top in a single point.

Also, Turkish manti is usually boiled in simmering water like pasta, whereas Armenian manti, as I mentioned above, is either baked (sini manti) or simmered in a flavorful broth (sulu manti).

Both styles of manti are finished with a yogurt-garlic sauce and oftentimes sumac, but the Turkish style typically has a spiced butter sauce as well as Aleppo pepper flakes and dried mint.

How to make sini manti

Beat together eggs, water, salt, and olive oil. I make the dough in a stand mixer fitted with the dough hook attachment, however you can also make it by hand.

Add the flour to the mixer bowl, then add the wet mixture and mix for 3 to 4 minutes until smooth and pliable. Cover the dough with a tea towel and set aside for 30 minutes.

To make the filling, mix together ground beef, minced onion, parsley, salt, pepper, and paprika, and refrigerate until needed.

Preheat the oven to 400°F. Grease pans with butter and set aside.

Having a pasta roller or a pasta roller attachment on your stand mixer is extremely helpful to roll out the dough, although you can roll it out by hand with a rolling pin instead.

Here’s how to do it with a pasta roller. Cut off small pieces of dough to work with a little at a time (PHOTO 1). Dust the piece of dough with flour and carefully stretch and flatten it into a rough rectangle.

Run this piece of dough through the pasta roller at the widest setting (typically #1 on the dial) (PHOTO 2). Then fold it over itself once or twice, flatten again with your hands (PHOTO 3), and run it through the machine again on the same setting (PHOTO 4).

Proceed to the next widest setting (typically #2 on the dial) and run the dough through the machine. Then keep going, running your dough only once through each subsequent level until you reach your desired thickness. Aim for #4 on the Kitchenaid attachment for optimal thickness.

Cut each strip of dough into 1 ½ inch squares. Place ½ teaspoon meat filling into the center of each square and pinch the two ends with your fingers to form a canoe-shaped dumpling.

Repeat with the remaining dough and meat filling. Arrange the manti close together in the buttered pans. Dot the tops with bits of butter (PHOTO 5), and bake until golden and crisp (PHOTO 6).

Meanwhile, make the yogurt-garlic sauce by mixing together yogurt, minced or crushed garlic, and a little salt. Add chicken broth and water to a saucepan and season with salt and pepper. Bring to a simmer.

When the manti are golden brown, remove the pans from the oven and ladle the broth mixture over the top. The pan will sizzle. The broth should fill the pan about ¾ of the way up the manti (PHOTO 7). Reserve the rest of the broth for serving.

Return the pans to the oven and bake for 10 minutes longer until most of the broth is absorbed into the manti, and about ¼-inch of broth remains on the bottom (PHOTO 8). They will absorb some of the broth and slightly plump up, yielding a crispy-chewy-soft texture.

Remove the pans from the oven and serve in individual wide bowls, ladling some more of the hot broth over it. To finish, drizzle yogurt and garlic sauce and sprinkle sumac generously over the top. And there you have it! The best manti ever!

To freeze: prepare the manti through the first baking step before adding the broth. Cool in trays and wrap with foil. Freeze in the trays, or freeze in freezer bags and then reassemble in a single layer into trays before finishing. To finish cooking: defrost overnight in the refrigerator. Bake them in trays at 400°F for about 10 minutes, then add the hot broth and continue with the steps as instructed.

Some people take short-cuts and use wonton wrappers. I don't recommend this. Making manti is a tedious process, but you will taste the difference if you go the extra mile and make your own dough from scratch.

Years ago, my Armenian grandmothers would roll out the dough with a rolling pin, and cut it with a knife into squares for assembly. Since then, a pasta rolling machine has made life easier. A pizza cutter has replaced the knife for faster cutting. If you have a Kitchenaid pasta roller attachment, I highly recommend it to make the process even faster. The faster you make it, the faster you can eat it!

It still helps to have an extra pair of hands (or more) to assemble these morsels. Even with the newest dough-rolling technology, they can be a lot of work, but so worth it!

My family typically does a factory-style set-up. We make the dough in our Kitchenaid stand mixer. While it rests we butter the pans, and mix together the ground beef mixture. One of us rolls out portions of dough using the Kitchenaid pasta roller attachment. Another then cuts the ribbons of dough into squares, while yet another dots the top of each square with a spoonful of beef. Then we pinch the dumplings closed and arrange them in the pans. Repeat.

If you bake the manti in a darker pan (such as a non-stick pan) they will brown much faster than in a lighter colored metal pan. In that case bake it for less time just until the dumplings are golden brown.

If you multiply this recipe and make additional pans of Armenian manti you should rotate the pans from top to bottom partway through cooking so they brown evenly. You may also need to bake them a bit longer so all the pans are evenly browned. 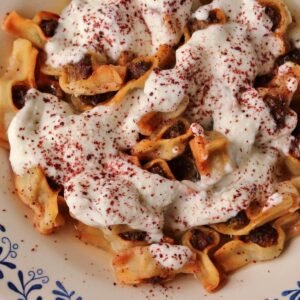