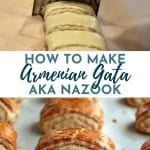 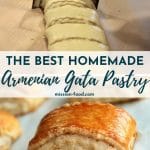 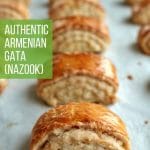 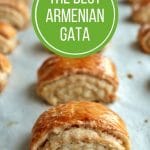 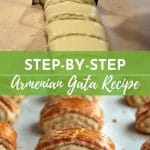 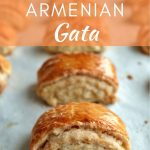 Gata is easily one of the most beloved Armenian desserts. It's a pastry with similarities to both croissants and rugelach, but with a personality of its own. Some call it nazook, but this typically refers to a walnut-filled version made by Iranian Armenians. Crisp on the outside, flaky within, with spirals of vanilla-laced sweetness throughout, it's a divine dessert any time of year.

Whether you call these morsels gata (as my family does) or nazook (as some Iranian-Armenians typically do), the pastry itself is amazing! There is often regional differences in terminology for Armenian recipes.

Many Armenians grew up in various countries throughout the Middle East and Near East because of wars in the area. Vocabulary and cooking methods for popular dishes vary because of this. My family comes from Yerevan, the capital of Armenia, and to us this is gata 🙂 There is also a flat version of gata, but this rolled one is my favorite!

My aunt has perfected her gata-making technique over years of tweaking. She recently passed those secrets on to me. And lucky for you, I'm in a sharing kind of mood!

Not only are the ingredients important to yield the perfect gata, but the tricks she uses make the process easier. Thus now we can all create an all-around excellent pastry using this incredibly detailed recipe.

How to make Armenian Gata: Day 1

This is a two-part process and must begin the day or evening before baking the pastries. The dough is very easy to make, especially with the use of a food processor.

This recipe yields a lot of dough. Make half the dough at a time, and then combine the two halves. This will give the dough plenty of room to move around the bowl of the food processor.

Ingredients in the dough include flour, butter, baking soda, baking powder, and sour cream. After making the two halves of dough, and pressing them into one mass, you will need to laminate the dough.

First you will cut the dough into four equal parts. Then for each quarter fold the dough multiple times in a technique similar to making croissants, but without the block of butter.

Here the butter is already worked into the dough via the food processor step, similar to making pie dough. These "laminated" dough squares rest in the fridge until we are ready for step two the following day.

The next day, you'll begin by making the filling for the gata, referred to as "khoreez" in Armenian. This process begins similarly to the dough, by blitzing flour and butter together in the food processor. You will then add sugar and vanilla to yield a sweet, sandy filling.

Working with one square of dough at a time, roll it out into a thin rectangle. The thinner it is, the more layers you'll yield when you roll it up! Cover the dough in the "khoreez" filling, leaving a small uncovered edge for sealing.

Use the palms of your hands to press the filling into the dough to make the rolling process less messy. Tightly roll the dough into a spiral, similar to assembling a jelly roll.

Finally, use a rolling pin to gently flatten the roll. Don't use a lot of pressure. Simply allow the weight of the rolling pin to do the work for you. Now, we're ready to finish the gata!

It's easier and less messy to brush the entire roll with egg wash before cutting it into pieces.

It is traditional to use a serrated vegetable cutter when portioning gata. This results in beautiful serrated edges, and picture-perfect gata! If you're unable to acquire such a tool, a dough scraper will work in a pinch, but won't yield the same refined look.

Arrange the gata on parchment-lined baking sheets. Bake the gata one tray at a time for 25 to 35 minutes at 350 degrees F, rotating the pan halfway through the baking time. You can use this time to work on assembling the remaining gata. Multitasking for the win!

The gata will bake until golden, showing off their lovely flaky layers and sweet filling. The delicate vanilla flavor shines through these crisp and delectable sweets.

Although the process to make gata seems lengthy, it's really not. You will certainly need to plan ahead. Other than that, as long as you use these convenient tricks you'll find that the resulting gata is absolute perfection.

Armenian gata is especially great at Christmastime and around Easter, but it's delicious any time of year. Have you ever eaten these delicious treats before? 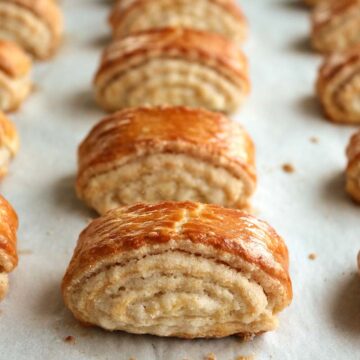 Gata is easily one of the most beloved Armenian desserts. It's a pastry with similarities to both croissants and rugelach, but with a personality of its own. Some call it nazook, but this typically refers to a walnut-filled version made by Iranian Armenians. Crisp on the outside, flaky within, with spirals of vanilla-laced sweetness throughout, it's a divine dessert any time of year.
4.86 from 35 votes
Print Pin Rate
Course: Dessert
Cuisine: Armenian
Prep Time: 1 hour 10 minutes
Cook Time: 2 hours
Resting Time: 12 hours
Total Time: 15 hours 10 minutes
Servings: 45 to 50 servings
Calories: 168kcal
Author: Victoria
Prevent your screen from going dark