Apple cider gives this Apple Cider French toast a gentle tang, while the streusel adds a touch of sweetness. This recipe works well with any tender white bread. While the streusel-crusted slices taste fabulous alone, they’re even better with bacon or sausages on the side.

The measurements for the custard are nearly identical to Sarabeth's standard French toast recipe, but replace the milk with apple cider. I expected/hoped this would give the French toast more apple flavor, but it was really quite mild.

The recipe's description notes that it offers a "gentle tang" and that's probably the best way to describe it. The French toast itself is fluffy and almost creamy on the inside. The streusel adds sweetness and a slightly crunchier crust than if you went without.

I actually halved this recipe when I made it, and then cooked the French toast in two batches in my large non-stick skillet. By the time the second half of the soaked bread made it into the stresuel, some of the egg had dripped into the streusel and made it really mushy and difficult to work with.

I had to press wet eggy streusel to the outside of each piece of bread. Next time I may put half the streusel onto a plate at a time and then kind of clean it off before putting more on the plate so it doesn't continue to get wet from the dripping custard.

Otherwise, this French toast was a breeze to make! I love that it finishes cooking in the oven. Not only will that ensure it's cooked through, but all of the French toast will emerge hot from the oven at the same time! I used fresh raspberries instead of blueberries to top mine, and didn't really need any extra butter at the table for serving.

I baked my own bread for this French toast, but didn't make the recommended Great Bread recipe from the book because it was just a bit more time consuming than I could commit to on a weeknight.

Yes, I baked homemade bread on a weeknight after getting home from a long day at work, just so I could enjoy this French toast over the weekend. That's dedication, if I may say so myself.

I needed a recipe that didn't have quite as much proofing time as most of my other bread recipes and found a version based on Julia Child's recipe (I'm not sure it's the original) and it turned out really well, especially considering I spontaneously made it on a weeknight. I used part of one loaf for the French toast and froze the other full loaf to make more French toast another weekend.

Although I have a lot of breakfast-centric cookbooks, this may be my new favorite. It contains basic recipes, but also a lot of really creative and unique twists on my favorite meal of the day.

I have a long list I'm looking to try, giving me even more reason to look forward to the weekend! If you're a fan of Sarabeth's Bakery, a fan of breakfast, or just a fan a beautiful cookbooks, this is a wonderful option and great for Christmas gifts as well this season! 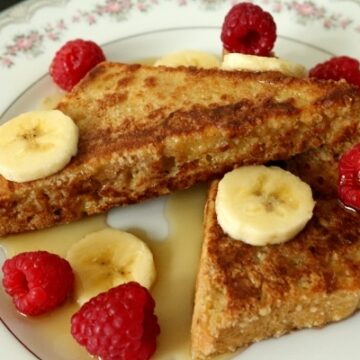