I am a brunch fiend! It's my favorite meal (probably because I eat it more rarely than other meals) and I love going out with friends, and also cooking brunch foods at home. I personally own quite a few brunch and bakery cookbooks, sharing recipes for everything from omelets to croissants.

If you eat it for breakfast, I probably have about 20 different recipes for it. But there's always room for more, right? I recently had an unforgettable brunch experience at Clinton St. Baking Company, on the Lower East Side of Manhattan. I couldn't resist picking up a copy of their recently released cookbook to review. There were so many menu items that I had wanted to try, so making them myself is a great idea!

When I review a cookbook, the first thing I do is I read it, from cover to cover. I may not read every single recipe, but I actually read through a lot of them, and I read all of the introductions, additional tips and information. I think it's really unfair to pass judgment on a book without really taking the time to absorb it, which is why I hate when people write reviews that say things like, "I haven't actually made any of the recipes, but the pictures look so good!!" Like, really? That's not helping me.

I also find that in thoroughly reading through a cookbook, I almost always will find typos or discrepancies in recipes, even in some of my favorite cookbooks. Editors make mistakes! They're people too, you know. While my overall opinion of the Clinton St. Baking Company Cookbook is really good, it too had a few errors and discrepancies that I will point out to my readers, because you know I am brutally honest and can still love and recommend a book while pointing out its imperfections 🙂

First of all, in the recipe for Cherry Crumb Muffins, the recipe says it makes 10 muffins, but then tells you to reserve 8 cherries for topping the muffins. I'm gonna go out on a limb and say you should reserve 10 cherries (if it indeed makes 10 muffins) so 2 people aren't left out of the cherry love. Just sayin'.

I also thought it was unusual that the Vanilla Buttermilk Waffle recipe does not actually contain any buttermilk. It specifies to use the pancake batter recipe, and then adds a few additional ingredients to it, none of which include buttermilk. I wonder if they perhaps replace the milk in the pancake batter recipe with buttermilk for their waffles, but nothing of the sort is explained in the book, so I can't help but wonder what makes them "buttermilk" waffles. Lies? Hmmmmm.

I decided to make some of their famous pancakes. I had read in other reviews that the pancake recipe makes a ridiculous amount of pancake batter, so halving the recipe is recommended (I took care of that for you in the recipes below. Everything has already been halved... you're welcome!). I must agree with this.

The original recipe says it makes 18 to 20 (3-inch) pancakes. Using the ¼ cup measure as indicated in the recipe, half of the recipe actually made about 18 4-inch pancakes. No lie. It was more than enough to serve 4 people 4 pancakes each (which even at the small size of 4-inches was incredibly filling).

I would only recommend making the full recipe (just double the amounts below) if you plan on serving a giant crowd (or freezing lots of leftover pancakes to reheat later). Regardless of the number of pancakes that the recipe made, these were some of the fluffiest and most delicious pancakes we've ever had. Folding in beaten egg whites into the batter is the reason that these are so fluffy.

I would happily use this base pancake recipe for various pancake flavors in the future! And just so you know, the book contains instructions for 8 different (and unique) pancake toppings (such as Caramelized Apples and Pears with Praline and Cinnamon, and Fresh Raspberries and Whipped Lemon Cream, among others), as well as sharing the famous maple butter recipe. It's swoon-worthy...

For this pancake adventure, I decided to make the Crunchy Bananas and Cinnamon Chili Chocolate Sauce topping, definitely putting these flapjacks over the top (I halved that recipe too, and it definitely made plenty!). These were some of the most decadent and delicious pancakes we've ever had!!

It took a little effort to put together all of the elements, making the pancake batter first and refrigerating it, preparing the cinnamon-spiked banana batter and the chocolate sauce, deep-frying the bananas while cooking the pancakes, and then assembling it all. When it finally comes together, however, these pancakes will knock your socks off.

The cinnamon and chili pepper (we used cayenne) add some delicious spice to the rich chocolate sauce, while the crisp, molten banana is doused in cinnamon-sugar, a final glistening touch. These pancakes could make men, women, and children fall to their knees to praise the pancake gods. It's not unlike a religious experience.

My final thoughts on the cookbook are these. The recipes I've tried so far work. They yield really delicious results, however, I have found that some of the sizes and proportions seem a little off to me, as in, the size of the biscuits they ask you to make are simply too small to realistically make the biscuit sandwiches as they specify, and the amount of pancake batter in the full recipe makes way more pancakes at the size specified, than the recipe says it will. With the exception of these faults and a few others, the recipes I have tried actually turned out so well that I'd be crazy not to make them again! 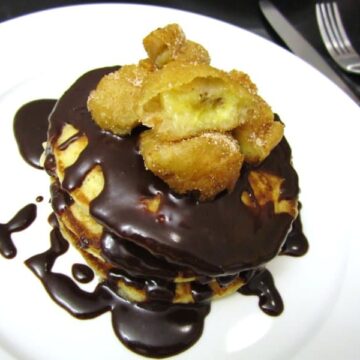