I really love seeing how the empanadas are so vastly different between some of the Latin American countries. For example, the salteñas of Bolivia are football shaped. They feature a very stewy filling held together with gelatin when prepped to make them easy to fill. They're then baked.

Salteñas de Pollo from Bolivia are essentially Chicken, Potato, and Green Pea football-shaped baked empanadas. These are really unique empanadas, featuring a slightly sweet golden-hued dough and a rich, stew-like filling. The football-shaped pockets are then baked until golden.

Salteñas de pollo are a bit time consuming to make. This is mainly because there is a lot of resting/waiting in between steps. The filling is made in advance, and must chill at least 6 hours or overnight.

I luckily had all the ingredients on hand for these salteñas de pollo, including leftover rotisserie chicken. The filling is essentially a thick chicken stew studded with finely diced potatoes, onions, peppers, and peas.

Gelatin is used to jell the filling, making it less messy to assemble. In theory, once heated a soupy or saucy filling will result, yet whatever soupiness my filling had seemed to just absorb into itself (or leak out of a few).

Regardless, the filling maintained a moist texture and I was very pleased even without the actual liquid in the filling of my salteñas de pollo.

The dough is slightly sweet, yielding a crispy contrast to the savory filling. I weighed out each portion of dough and resulted in 25 pieces (a bit less than the recipe would otherwise create) and each piece when pressed with my 6 ½-inch tortilla press nearly squeezed out the sides, so I know my dough circles were a tad on the larger side than the 6-inches the recipe states, although I followed the directions to a T.

My filling to dough ratio was also a little low, and some of my dough sagged a bit after assembly because there wasn't a ton of filling packed inside to hold the shape, but alas, this was really a minor concern.

Also as I neared the end of my assembly, the dough that had been pressed between the parchment sheets the longest got a little extra sticky and stretched slightly as I removed them to begin shaping. Where the dough stretched a bit too thin, once baked the salteñas over-browned, but still tasted crisp and delicious.

One big pointer I'd like to offer: use 3 baking sheets instead of the 2 mentioned in the original recipe (I've already changed this below), and bake in batches.

It's important that the salteñas don't touch, and yet even though I spaced mine out before baking, and even baked a few on an additional small baking sheet, many of them still stuck together.

One of the sheets even had quite a few leaks, although I was able to gently pry them apart and still retain the integrity of the filling. 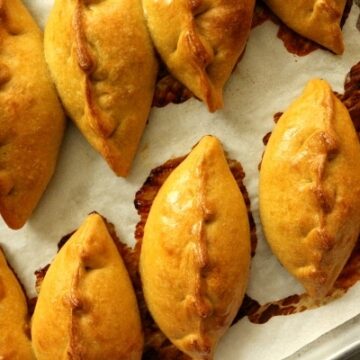