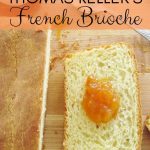 This is the ultimate French brioche recipe, originally written by Jean-Louis Palladin and shared with love by Thomas Keller.

I have been longing to make brioche ever since the first time I had it... a very long time ago. It's sorta been sitting on my "to make" list. How it ever took so long to finally make it, I'll never know.

I was inspired by a hunk of Brie. A hunk of Brie that spoke to me. It had the hots for some rich, buttery brioche, and since I was lusting for the Brie, I finally came around and got working on this brioche.

Why is this recipe special?

I have a lot of brioche recipes, so selecting one to make presented another challenge. In the end, I went with the obvious choice. I pretty much live and die by whatever Thomas Keller says. He's basically God of my kitchen.

The recipe actually comes from the late great Chef Jean-Louis Palladin. His brioche is known for its quality. During the step of adding soft butter to the dough, the aroma of bread and butter is inescapable.

The yeasty odor of the dough marries the rich butter so beautifully. God bless the French for creating brioche!

This brioche doesn't call for an eggwash on top, which is pretty standard in a lot of other brioche recipes. If you'd like to add some eggwash, by all means, go for it! I (smartly) saved my last egg to make cookies. Can you blame me?

For the record, I was a bit uncertain about my brioche in the early stages. It was VERY soft and wet. It almost reminded me of a thick batter, and when it came time to scrape it onto a floured surface to "fold," it became quite clear that mashing it around would be easier than folding.

If you think about it, it makes sense. This dough contains 2 ½ STICKS of soft butter. It softens further (and even melts I'm sure) as the dough sits in a warm place to rise. This very soft and even liquid butter results in a very soupy dough.

I'm confident that this is a big reason why brioche dough is prepared a day ahead of time before resting in the fridge overnight. It really needs that time to chill to firm the butter back up and make a pliable, shapeable dough. The next day, my dough was much more manageable!

Last year I went through a mild loaf pan obsession which led me to do extensive research on loaf pan sizes to try and determine which loaf pans size(s) was most optimal to own. Yeah I know. Freak. It really bugs me that so many recipes call for different size loaf pans.

A standard loaf pan (what this recipe calls for) fits about 1 ½ pounds of dough, while the size I used (and I'm sure many other people have) can hold 2 pounds of dough.

For what it's worth, I knew going into this that my brioche would not yield the same puffed, rounded top as it would in a smaller pan.

I also discovered that it took a bit longer to bake my bread until it resulted in the "hollow tap" sound (I actually turned off my oven, removed my breads, and then realized they probably should bake just a bit longer and had to put them back in their pans and back into the oven).

In any case, it definitely works with the slightly larger pans if that's what you have, but would definitely be optimal using the correct size pans. 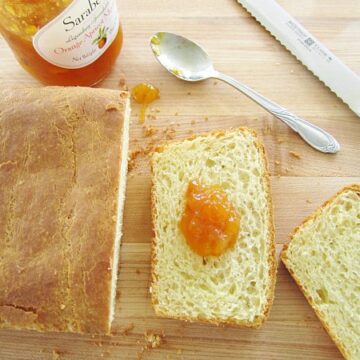