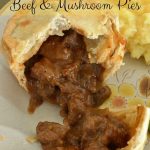 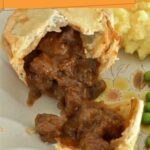 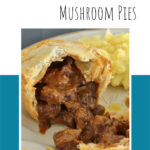 What's better than a flaky, savory meat pie? Individual sized mini Beef and Mushroom Pies with extra crust! They are crispy, golden, and delicious with fork tender beef and umami mushrooms throughout the filling. You can easily make these in advance and even freeze them. They're also perfect for a Harry Potter themed menu!

These adorable beef and mushroom pies are definitely more British than Irish. The latter would sway more towards a beef and Guinness stew for the filling rather than a broth-based stew. Regardless of their geographical origin, I'm totally on board to for these delicious, flaky, meat-filled treasures!

The filling is excellent, and considering it doesn't include a million ingredients it's really so flavorful. The small chunks of beef are perfectly fork-tender, and the bites of mushroom add another layer of hearty flavor.

Sear the small cubes of beef, then remove from the pan and sauté chopped onions and mushrooms until softened.

Add some flour and tomato paste, then whisk in broth. Return the seared beef, season, cover and simmer for a couple hours until the beef is fork tender the sauce is thick and luscious. Cool the filling completely before assembling your pies!

Line the muffin cups with circles of dough, then fill the cavities with about ½ cup filling each.

Top the pies with a small circle of dough, and pinch and crimp the edges to seal. Brush the tops with egg wash, cut a few vents to allow steam to escape, and you're ready to bake!

Bake the pies until the pastry is golden brown and the filling is bubbly. I often serve these with simple mashed potatoes and peas tossed with a little butter, salt, and pepper. Simple perfection.

I suggest doing the prep work a day in advance (for example on a Saturday), cooking the filling, and letting it chill overnight in the fridge along with the pie dough. Then roll out and assemble the little pies on Sunday in time for dinner.

I use a jumbo muffin pan to shape my mini beef and mushroom pies. It works really well for both the size and shape. Here's a little trick that really helps yield pretty pies without wasting too much dough:

To freeze these pies let them cool completely, then wrap individually in plastic wrap, place into a freezer bag and freeze. Thaw completely in the refrigerator before reheating. Reheat them in a 350°F oven on a sheet pan until heated through (internal temperature should be 165°F). 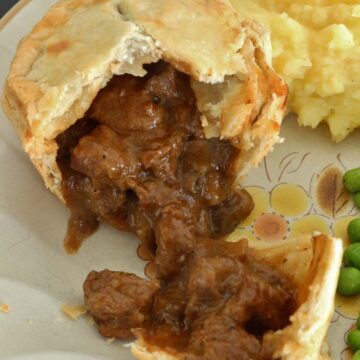