August 2, 2018 (Last Updated: June 29, 2020)
This post may contain affiliate links, which means that I may receive a commission if you make a purchase using these links. As an Amazon Associate I earn from qualifying purchases.
55shares
Jump to Recipe

A classic British savory pie in miniature form, these individual Chicken and Mushroom Pies are the epitome of comfort. Inside a perfectly flaky crust is a luscious chicken and mushroom filling that totally satisfies. This particular version is in honor of Harry Potter, since he enjoyed mini pies such as this throughout the books.

For two consecutive years I have made these miniature chicken and mushroom pies in honor of Harry Potter’s birthday. It’s July 31st in case you’re wondering!

This Ravenclaw (me) and her Hufflepuff friend (Camille) enjoy creating fun menus inspired by the books. We cook and eat some of Harry’s favorites for the occasion.

Harry and company eat an assortment of pies on the Hogwart’s Express in Harry Potter and the Half-Blood Prince. This is a classic British pie which would likely have been included in the mix.

This recipe is heavily adapted from the Unofficial Harry Potter Cookbook. I think this is a really cool cookbook with recipes of dishes mentioned throughout all the Harry Potter books.

With that said, Camille and I both agree that some of the recipes aren’t well-tested. We have come up with some tweaks to improve them. For example, these beef and mushroom pies are adapted significantly from the book.

They are basically an entirely different recipe. The quantities in the filling (more than doubled), the sizes of the dough circles, and cooking times have all changed from the original.

How to make individual chicken and mushroom pies

The first step to make these pies for Harry Potter (and yourself) is to make the dough. It’s pretty much a standard pie dough where you cut cold butter and shortening into flour. Then add cold water until the dough comes together. Form into two discs and chill for at least a couple hours before rolling out.

Next, make the filling by sauteing chopped onions and mushrooms in oil until softened. Season and add a bit of flour, then whisk in chicken broth and cook until bubbly and thickened. Cool the filling completely before assembling the pies.

Roll out each of the discs of chilled pie dough and cut into circles. You’ll need 6 larger circles measuring about 6 1/2-inches in diameter, and 6 smaller circles at 3 3/4-inch in diameter.

Cut a small wedge from one side of each of the large circles, and then fit the large circles into the cups of a jumbo sized muffin pan. Press the cut edges together to seal once the dough is fitted into the cup. This will keep you from having a rumpled piece of dough inside the cup.

Fill each cup with about 1/2 cup chilled chicken and mushroom filling. Brush the edges of the smaller circles with water and then seal them over the tops of the pies. Crimp the edges for a decorative flair!

Then brush the tops with egg wash, cut a few small vents, and bake until golden and bubbly.

How are these different from chicken pot pies?

So what makes these pies so special? Well, they are similar to American chicken pot pies, but without the carrots, celery, peas, and optional potatoes.

It’s really a much simpler filling that focuses solely on the chicken and mushroom. The filling is not boring by any means, and is perfectly seasoned and super comforting.

These little pies are SO GOOD! They’re a great way to celebrate Harry Potter’s birthday in the future. Or simply make them the next time you are looking for comfort on your plate.

Other recipes for your Harry Potter party!

Are you a Harry Potter fan? What house are you in? Take my word for it, throwing a party in Harry’s honor is a lot of fun, and it’s delicious too! Let me know in the comments if you try this recipe 🙂 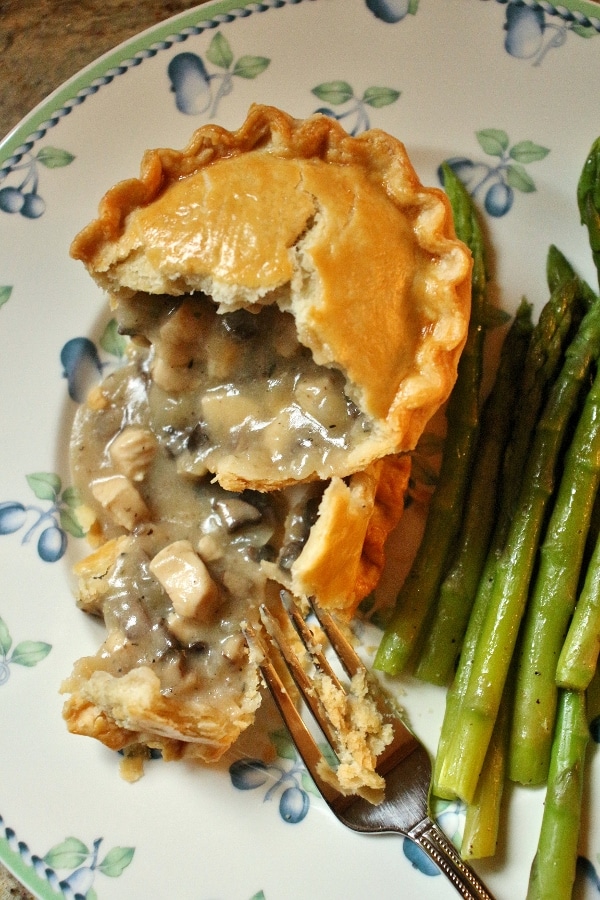 Victoria
A classic British savory pie in miniature form, these individual Chicken and Mushroom Pies are the epitome of comfort. Inside a perfectly flaky crust is a luscious chicken and mushroom filling that totally satisfies. This particular version is in honor of Harry Potter, since he enjoyed mini pies such as this throughout the books.
5 from 1 vote
Print Recipe Pin Recipe
Prep Time 1 hr
Cook Time 1 hr
Chilling Time 2 hrs
Total Time 4 hrs
Course Main Course
Cuisine British, Irish
Servings 6 pies
Calories 659 kcal

Hey! I'm Victoria, and I have been writing and sharing recipes on Mission Food Adventure since 2009. I studied culinary arts at Johnson & Wales University, am an avid traveler and cookbook collector, and a huge Disney fan. I've also worked at the Food Network and have a background in film and television. I love exploring the world, and recreating my favorite dishes in my own kitchen. Join me on my global culinary journey!