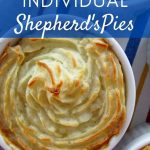 From the United Kingdom to The Republic of Ireland, Cottage Pies or Shepherd's Pies are synonymous with comfort food. The former typically features ground beef filling while the latter includes ground lamb. Otherwise, these names are pretty interchangeable for a ground meat base topped with mash. Regardless of what you call them, they are popular and delicious! This version yields adorable individual pies perfect for a party!

For my recent Olympic party, I elected to make individual Cottage Pies as my dish representing the United Kingdom. I thought serving these dishes of comfort in small ramekins would add a personal element to this traditional casserole. I must say they were very very popular to the party-goers. They all swooned with mouths full of this rustic British dish.

Many of you may be familiar with Shepherd's Pies, a more Irish version of the same dish that utilizes lamb for the meat component. Technically, if the dish uses beef it is Cottage Pie, but the terms are often interchangeable.

The ground meat (in this case beef) is combined with onions, carrots, and peas as well as a flavorful gravy. My gravy coated the meat mixture nicely, but if you'd like a saucier base for your pies, increase the amount of beef broth.

A simple mashed potato top conceals the meat while the casserole bakes. Ridges in the potato topping give way to beautiful browning and some nice texture.

Some people include cheddar cheese in their mashed potatoes, or top with a bit of shredded cheddar at the end. Although this sounds decadent and delicious, I decided to stick with the more traditional cheese-less route.

Piping the potatoes with a star tip add a really pretty touch to the final look of the dish. If you are going to do this as well, definitely puree your potatoes with a food mill or potato ricer to get the finest texture.

Otherwise chunks of potato could stop up your piping bag and cause a mess. If you choose to simplify your life and just spread the potatoes over the top, that's fine too, but I suggest adding a little texture to aid in browning.

The easiest way to do this is using the tines of a fork to scrape over the surface in a decorative way. This recipe can also easily be halved. 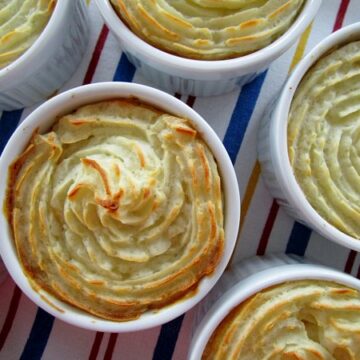