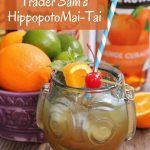 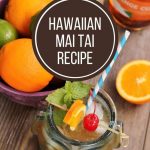 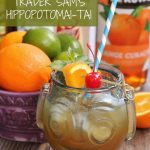 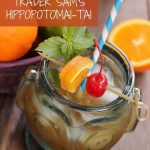 Trader Sam's HippopotoMai-Tai is nearly identical to the original Mai Tai tiki drink invented at Trader Vic's. This playful version is served up with a side of theatrics. Make it yourself with this recipe, or find it at Trader Sam's Enchanted Tiki Bar (Disneyland), Trader Sam's Grog Grotto and Trader Sam's Tiki Terrace (Walt Disney World).

Tiki culture is a blend of the Polynesian and the Caribbean, although many people simply credit it as being Hawaiian. There's more to it than that. The concept of tiki is to help people escape reality while being transported to the tropics. Enjoying tropical flavored cocktails with ingredients like lime juice, curaçao liqueur, and Caribbean rum is the best way to achieve this.

Although there are many tropical cocktails out there, perhaps the most famous is the Mai Tai. Disney's version, the HippopotoMai-Tai is more sweet than tart. It's considerably strong with “two shots of rum” plus a generous splash of orange curaçao to round it out.

The origin of the Mai Tai

The legend goes that Victor Jules Bergeron, better known as Trader Vic, invented the Mai Tai at his restaurant of the same name in Oakland, CA in 1944. He came up with a new exotic rum drink and served it to two friends from Tahiti. One of them exclaimed, "Mai Tai-Roa Aé,” which means “Out of this world-the best” in Tahitian. The rest is history.

The Trader Sam's HippopotoMai-Tai recipe is very close to the original, but swaps agave nectar for the rock candy syrup. It also increases the amounts for both syrups.

The experience at Trader Sam's

I am a firm believer that pretty much everything is better at Disney. As a brand, Disney goes above and beyond to at least attempt authenticity whenever possible. Take, for example, a desire to include tiki bars in a couple of their U.S. resorts. Trader Sam's Enchanted Tiki Bar at the Disneyland Hotel is a play on the inventor of the world's most famous tiki drink: Trader Vic.

Years later, Disney multiplied its tiki bar success by opening Trader Sam's Grog Grotto and Trader Sam's Tiki Terrace at the Polynesian Village Resort at Walt Disney World. This duo of tiki bars offer indoor and outdoor seating with a matching menu. The drink menu is extensive and elaborate, but half the fun of a night out at Trader Sam's is the atmosphere.

I personally haven't visited the Enchanted Tiki Bar in California, but I've been to both the Tiki Terrace and Grog Grotto in Florida. The Tiki Terrace has outdoor seating, and is a nice way to have a drink and a bite to eat outdoors under the shade of a big umbrella.

Trader Sam's Grog Grotto is a small and noisy indoor space with dark lighting and whimsical tiki decorations. The wait for a table here can be quite long, but worth it in my opinion. The ambiance just can't be beat!

For example, when we visited whenver someone ordered a HippopotoMai-Tai there were definite theatrics involved! The server shouts "two shots of rum" while dragging a small, pink, wooden hippopotamus on wheels with him on his way to the table to deliver the drink.

As I mentioned before, the HippopotoMai-Tai recipe is very close to the original, unlike some bastardized versions served at many bars. Combine fresh lime juice, dark rum, light rum, orange curaçao, agave nectar, and orgeat syrup with ice in a cocktail shaker.

These are the preferred brands used at Trader Sam's at Disneyland and Walt Disney World:

If you're unable to acquire these specific brands, just use your favorites or whatever is available at your liquor store. If you absolutely aren't able to find orange curaçao do not substitute it with blue curaçao. You can use triple sec, which is another orange-flavored liquor although they are not the same. The color and sweetness is different between the two, with orange curaçao being darker and sweeter.

Shake vigorously, then strain into an ice-filled glass.

Traditionally Mai Tais are served in a 12-ounce double old-fashioned glass. I serve my HippopotoMai-Tai in a souvenir glass I purchased at Trader Sam's, but I also have another fun tiki cup (also from Disney) that I like to use. It's really large, and is big enough for a double drink!

Garnish your drink with a big sprig of fresh mint, and a little skewer of orange slice quarters and a maraschino cherry. It will look and taste exactly like a trip to far away and exotic places!

What to serve with it (inspired by Trader Sam's food menu)

Are you a fan of tiki culture and drinks? Although I have tried several drinks on the Trader Sam's menu, the HippopotoMai-Tai has a special place in my heart. It's the first drink I ordered there, and the first I recreated at home! With "two shots of rum!" 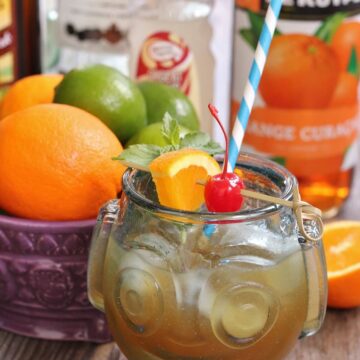