I am a huge fan of the Olympics, counting down for years until the next one. It's a never-ending cycle of Olympic obsession. I love watching the various sports, but I also just love being patriotic and supporting all of our athletes.

Embracing all of these nations coming together in competition can perhaps be best expressed through culinary exploration. What better way to celebrate our diversity than by cooking and eating foods from around the world.

I plan on sharing more posts leading up to and during the Olympics, including other international recipes, but today let's take a look at a really delicious dumpling that embodies a fusion of traditional Thai flavors in a Chinese-style package.

These Chicken & Thai Basil Dumplings were incredibly popular at New York City's Rickshaw Dumplings in its heyday. The recipe for these beloved dumplings is available in Kenny Lao's Hey There, Dumpling! cookbook.

It does require a bit of advance prep, including preparing the lemongrass marinade and allowing it to sit at least overnight or up to a week. After mixing the strained marinade with the other filling ingredients, it's also a good idea to chill the mixture further before using it. This will allow the filling to be more easily scooped into the wrappers.

With just a bit of planning, you could potentially be eating these dumplings (instead of drooling over my pictures) within a couple days! Not too shabby.

I added a bit more nam prik pao to yield a slightly spicier sauce, but even with my addition it was still relatively sweet and creamy with very little spice. The sauce can definitely be tweaked to your taste.

These dumplings are easy enough to make with store-bought dumpling wrappers. There are a few steps involved in their preparation, but if you like Thai flavors, and Chinese pan-fried dumplings, you will adore this combination.

You can also make these dumplings and freeze them on a baking sheet before storing the frozen dumplings in your freezer in a freezer bag or airtight container for cooking at a later time.

What a perfect way to celebrate the Olympics, by pan-frying some of these flavorful, chewy and crispy dumplings for you and your friends. 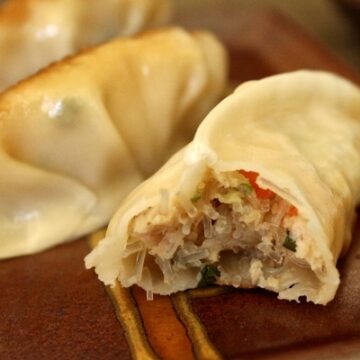 Adapted from Hey There, Dumpling!