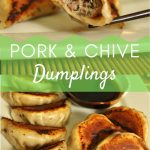 A classic dim sum staple, these Pork and Chive Dumplings are so versatile. They are perfect for simple snacking or even celebrating Chinese New Year.

Pork dumplings are classic appetizers on so many Asian menus, whether they are Japanese gyoza or Chinese jiaozi. They can easily be pan-fried, deep-fried, steamed, or boiled with excellent results.

The pork filling itself can range based on the cuisine and the cook. Cabbage and/or chives often compliment ground pork along with soy sauce and minced ginger.

I've shared pork and cabbage dumplings in the past, so today I'm sharing a recipe for pork and chive dumplings. The chives here come in the form of Chinese chives (or garlic chives).

If you can't find these, use scallions, although the flavor won't be quite the same. It's worth seeking out the real deal to make these morsels authentic. If you have access to an Asian market nearby, they will likely carry Chinese chives in their produce section.

The filling is a cinch to make. Once you get the dough technique down, these dumplings come together quite efficiently. You can use store-bought wrappers as well, but I typically find the quality to be inferior.

Quite frankly they can be a pain to pleat since the dough doesn't stick to itself as well as fresh dough does. Even wetting the wrapper doesn't solve this problem. I highly encourage you to try making your own wrappers from scratch. They're easier than they look!

Pan-fried dumplings are always my favorite. They boast the most complex texture: a little crunchy + a little chewy = absolute perfection. Steaming or boiling will be your healthiest option.

I find that even using traditional ground pork (not the super fatty kind), my dumplings are still very juicy. Sometimes the juice even explodes a bit when I bite into these bad boys. Always have a napkin at the ready!

In the recipe below, I share a couple of different pleating techniques for dumpling making. The terms "pleated crescents" and "pea pods" come from Andrea Nguyen's Asian Dumplings as does the basic dough recipe.

I'm always trying out some variations. In this case I did a slight tweak to the crescent shape for my pork and chive dumplings. I simply pinched the dumpling together in the center, then made a couple pleats on either side in opposite directions towards the middle.

I think they turned out pretty cute, if I may say so myself. Although a beautiful-looking dumpling is appetizing to the eyes, at the end of the day flavor is paramount.

I'm pleased to report that these classic dumplings definitely hit the mark. Between this recipe and the pork and cabbage ones I've shared previously, you have two wonderful options for classic pork dumplings. Either would please any dumpling lover!

I've also shared many other dumpling recipes over the years. Please check them out if you're interested in expanding your dumpling making outside the tasty classics!

What's your favorite dumpling filling? Are you a traditionalist or a creative? Let's talk dumplings! Leave me a comment below, and don't forget to rate the recipe and share with friends. Thank you! 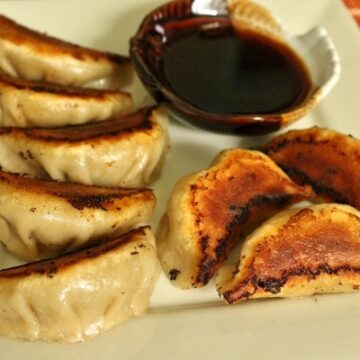 Freeze uncooked dumplings by arranging in a single layer on a tray or sheet pan. Freeze until firm, then transfer to freezer bags. Cook the dumplings either thawed or from a frozen state. They may require a bit longer to cook if frozen.