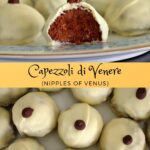 Amadeus has been one of my favorite movies since childhood. It's not a children's movie by any means, but my entire family has been watching and loving this Academy Award-winning film since it was first released. My sister and I can quote the entire movie by heart!

If you haven't seen it, and have an appreciation for classical music and Mozart, definitely check it out. It's an incredible film, although I'm not a huge fan of the director's cut. I prefer the original version which is less available these days, unfortunately.

Setting the Scene in Amadeus

Mozart's wife Constanze secretly brings a portfolio of Mozart's work to court composer Antonio Salieri. She wants him to consider Mozart for an important job.

Salieri, a gluttonous Italian who is jealous of Mozart's talent, offers Constanze a refreshment called Capezzoli di Venere, or "Nipples of Venus." Constanze giggles because their name is incredibly naughty, as is their appearance. Watch the interaction in the video clip from Amadeus below!

These Capezzoli di Venere are quite scrumptious! I can't blame Constanze for stealing a second one when Salieri isn't looking. The filling is chocolaty, buttery, and delicately nutty with the warm essence of brandy to tie it all together.

Salieri describes the treats as Roman chestnuts in brandied sugar. Looking for recipes for Nipples of Venus online is an interesting challenge. There doesn't seem to be a single official way to make these now-famous confections.

Back in the 1700's, I'm not sure how this dessert would have theoretically been made (if at all), so it's all conjecture since online recipes are inconclusive.

I researched various versions and put together the recipe that made the most sense to me. In the movie, the embellishments on top are dark brown, so I decided to stick with dark chocolate to finish my creations.

I piped a small dollop, whereas in the movie it appears to be more like a flat brown disc. Regardless, this is about as accurate as we can get without sources from the 18th century to set us straight.

Making the filling is the easiest part. First blitz the chestnuts in a food processor until they are finely chopped. Then in a stand mixer, combine room temperature butter and sugar, then add the chestnuts, melted chocolate, brandy, and vanilla extract.

If the mixture is rather soft, simply refrigerate until it's firm enough to scoop. The easiest way to shape them is using a small ice cream or cookie scoop to yield uniform truffles. Arrange truffles on a parchment paper lined tray and chill for at least 15 to 20 minutes.

You can try a different technique for coating the truffles if you prefer, but I think mine works well without creating a lot of wasted white chocolate. Put each truffle on a fork and spoon white chocolate over the top. Once the excess drips off, carefully push it off the fork and onto a piece of parchment to dry.

Finally, top each of the Capezzoli di Venere with a small dot of melted dark chocolate. Cool completely until all the chocolate decorations are hardened before serving.

Store Nipples of Venus in an air-tight container in the refrigerator, however, serve them at room temperature so the filling softens up a bit before enjoying.

I'm obviously not a candy-maker, and my "Nipples of Venus" may not look quite as smooth and polished as those in the film, but I think they turned out better than expected and they are truly delicious sweets I'd be happy to share with friends and family.

If you're a fan of Amadeus, or intrigued to try a decadent dessert with a really fun name, this recipe is for you. They are great at both Christmastime and Valentine's Day, although I enjoy them any time. As an aside, I actually visited many of the shooting locations from Amadeus when I visited Prague. Check that out as well for a fun blast from the past! 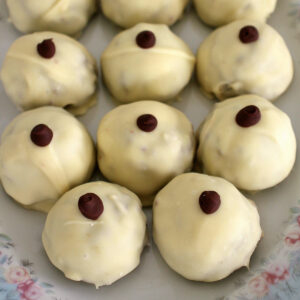