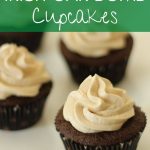 Irish Car Bomb Cupcakes feature a Guinness chocolate cupcake filled with Irish whiskey ganache, topped with Baileys Irish Cream buttercream! These are delicious edible variations of the politically incorrect cocktail of the same name. Regardless of what you call them, they are delicious celebratory sweets perfect to honor St. Patrick's Day!

Long after your green tee-shirts and shamrock-covered hats are put into hibernation, these cupcakes will still haunt you. The name comes from a cocktail where a shot of Irish whiskey and Baileys Irish Cream is dropped into a pint of Irish stout (typically Guinness).

Unlike the alcoholic beverage, which can curdle if not drunk fast enough, these cupcakes will not give you a hangover the next day (contrary to popular belief).

The cupcakes themselves acquire an Earthiness from the Guinness, but otherwise taste mostly of chocolate. Moist, delicious, and fluffy chocolate. The best kind!

The whiskey ganache filling is reminiscent of those little chocolates filled with liquor. You know, the ones at the duty free shop at the Canadian border in the mid-90s. They were my first taste of alcohol when I was decidedly underage. That whiskey ganache and the Baileys buttercream will collectively punch you in the face. Bam! These cupcakes are no laughing matter.

You may feel equally as guilty afterwards, be it from the decadent Baileys buttercream or the whiskey-spiked ganache filling, but life is a celebration so I say just go with it. St. Patrick's Day is typically a holiday of excess so if you're not being a little naughty, then what's the point?

In fact, transporting these cupcakes to my friends' house made my car smell like Baileys. My entire car. I'm pretty sure my car would have failed a Breathalyzer if it were human. I'm so glad I wasn't pulled over. They wouldn't have believed me. The sacrifices we make for baked goods.

Have you ever had an Irish Car Bomb cocktail? Or tried baked goods inspired by the classic ingredients? Let me know in the comments if you try this recipe and what you think! And don't forget to rate the recipe. Thanks! 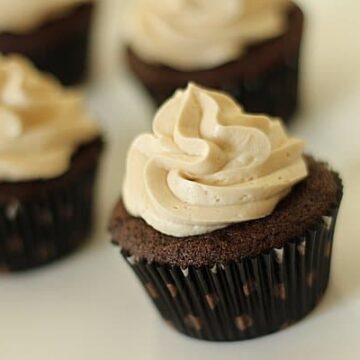