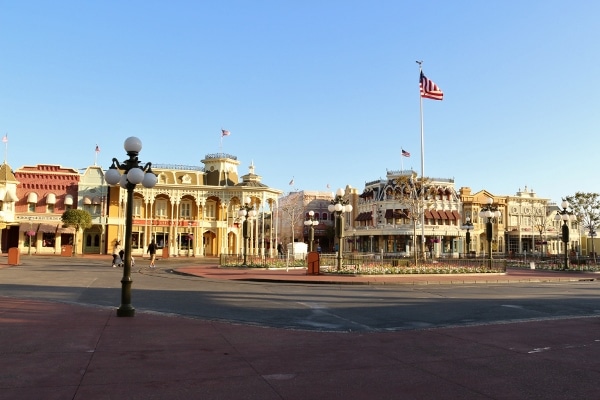 The Magic Kingdom. It's the epicenter of Walt Disney World with its iconic Cinderella Castle as its focal point. It's one of the biggest tourist attractions in the world, and yet it contains so many hidden secrets. There is so much that we do NOT see as guests, and yet this park's functionality is absolutely seamless. 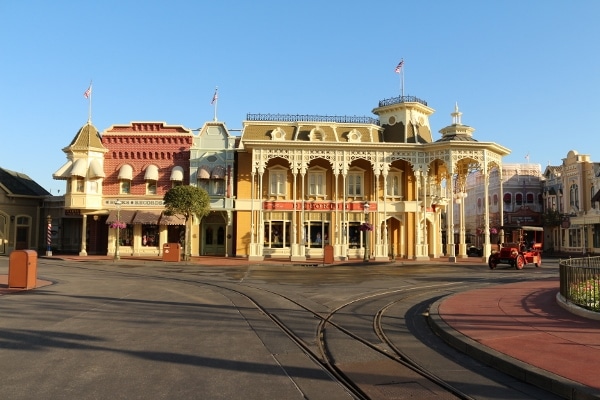 Disney's Keys to the Kingdom Tour allows guests 16 years of age or older to experience the Magic Kingdom from a unique perspective. At the time of this post, the tour costs $79 per person, lasts about 5 hours, and includes lunch at Columbia Harbour House. There are three different tour times daily: 8:30 am, 9:00 am, and 9:30 am. 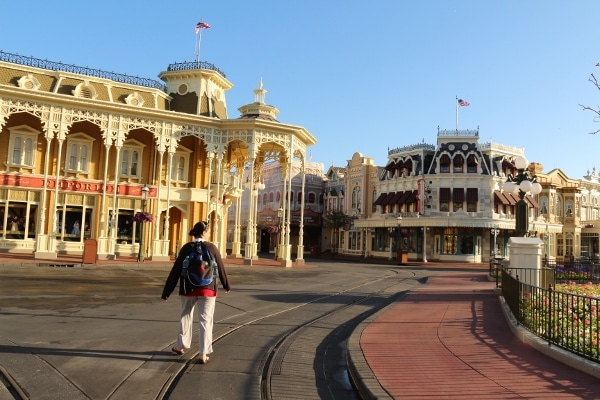 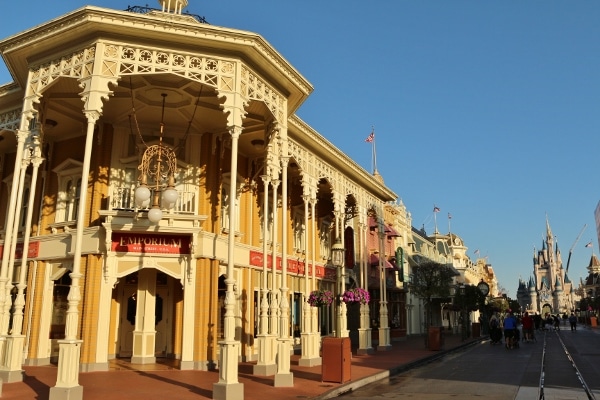 One of the coolest perks of going on the tour, in my opinion, is the ability to enter the park before it opens. If you select the 8:30 am tour time, and the park opens at 9 am (park opening times vary), then your tour begins 30 minutes before park opening, and you are allowed into the park even earlier than that to check in, etc.

We took advantage of this early entrance to check out Main Street USA practically deserted. It was also the perfect opportunity to take Cinderella Castle jumping pictures! 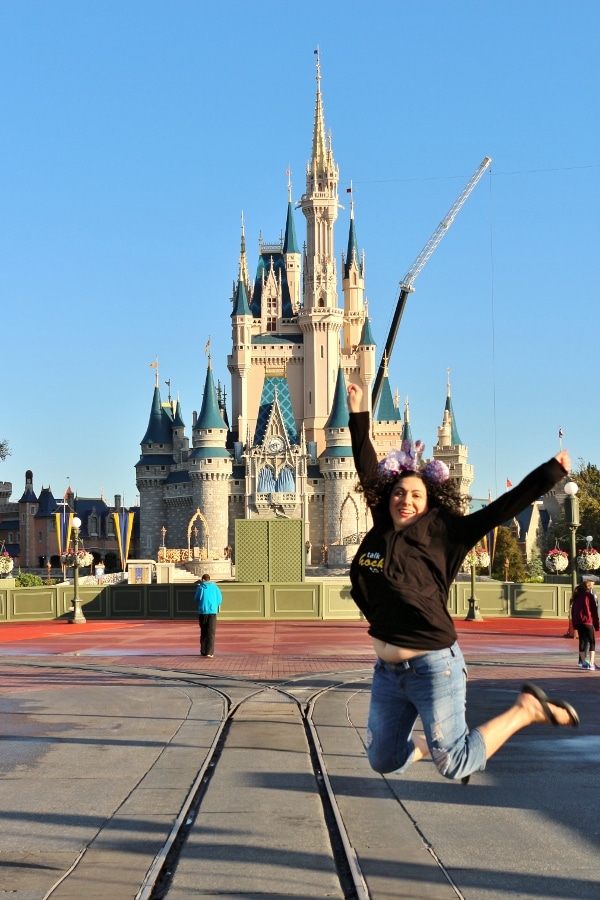 Our tour guide, Caitlyn, was incredibly knowledgeable and friendly. We began our tour on Main Street USA, where Caitlyn discussed the four Keys to the Kingdom in their order of importance: Safety, Courtesy, Show, and Efficiency. All decisions made within the park must meet these criteria in some way. 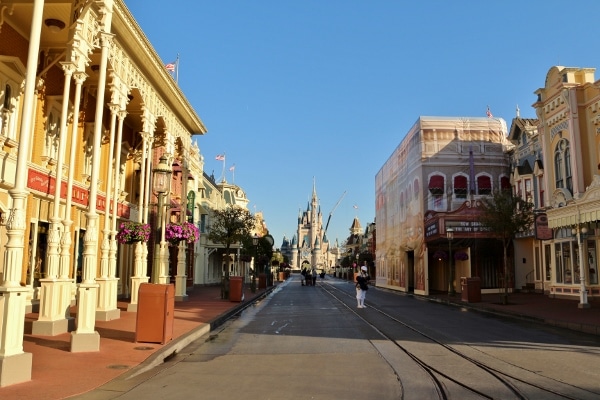 For example, when you enter the park, think of it as the opening credits to a film. Cinderella Castle is the feature presentation, and everything leading up to it is your introduction (show). For one thing, forced perspective is used on the buildings on Main Street USA as well as in Cinderella Castle to give the impression they are bigger and taller than they actually are. There are also many names of Disney execs on the windows of Main Street acting as the opening credits. Caitlyn pointed out many of them, none of which I would have ever taken the time to look up and notice in the past. 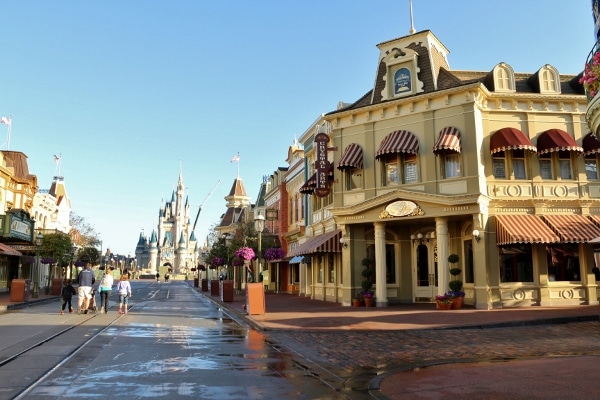 Did you know that Main Street USA actually is slightly uphill leading up to the Castle? This way, when you are tired and leaving the park at the end of the day, you exit slightly downhill, making it easier on your feet (courtesy). Did you know that the "pebbles" that appear in the sidewalks are actually ground up car tires, making the sidewalks less slippery on rainy days (safety). 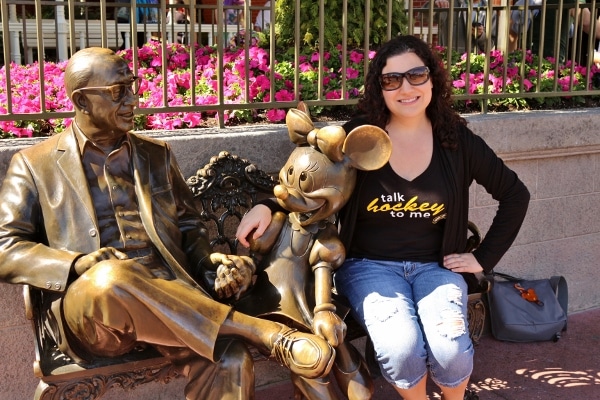 Ever wonder why all the store doors throughout the park are always open, letting out the air conditioning? Although it doesn't promote efficiency, it does offer safety and courtesy to the guests who can walk right into the stores without having to maneuver through the doors with strollers, etc.

Have you ever noticed the exterior of the Crystal Palace Restaurant? The end closest to Adventureland has theming consistent with that section of the park, while the remainder of the restaurant is more in tune with the turn of the century look of Main Street USA. Since this building sits between two lands, it needs to blend into both sections seamlessly (show).

Did you know that there are actually no bathrooms located in Liberty Square? The reason is because there was no plumbing in the colonial time period (and Disney wanted to keep all details as historically accurate as possible). But wait, you ask, what about the bathrooms in Columbia Harbour House and Liberty Tree Tavern? Technically, the bathrooms within these two restaurants are located far enough into the back of the restaurants that they are no longer found in Liberty Square. If you are seeking a nearby bathroom while in this area of the park, look down at the ground and follow the path within the walkway to lead you to the nearest available latrine.

And speaking of Liberty Square, there's so much more to experience here than you'd think. Did you know that the replica of the Liberty Bell was the fifth and final one cast from the mold for the original Liberty Bell? It's surrounded by the flags for the thirteen original colonies. 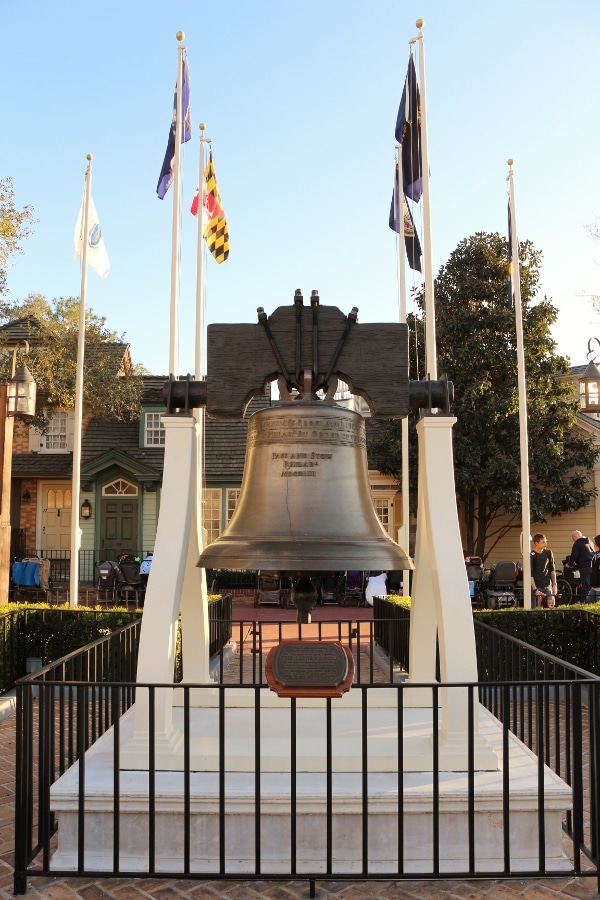 Right next to the bell is Walt's Liberty Tree. He selected this tree himself and had it transferred to the Magic Kingdom, where it actually sits in a giant planter, just like all the other trees and plants at the park (Cast Members utilize tunnels beneath the park called utilidors, so roots growing downward wouldn't really work here). Hanging upon the Liberty Tree are thirteen lanterns, each designed to represent one of the original thirteen colonies.

Paul Revere's lanterns can be found in one of the windows in Liberty Square, and speaking of windows, check out all the crooked shutters. The reason for this is that in colonial times, leather straps were used to affix shutters to people's homes, and unlike metal, leather can stretch over time, causing the shutters to become askew. Love all the authentic details! I'll never experience the Magic Kingdom the same way again.

The tour included rides on the Jungle Cruise and the Haunted Mansion (so there's two lines for attractions where you don't have to wait!) and learned awesome trivia about both rides (as well as others). Did you know that they dye the water in the Jungle Cruise to make it look murky? A big reason it's so murky--the hippos have no bottoms! Caitlyn called them "hippobottomless," haha. The murky water allows Disney to hide anything under the water that needs to remain hidden.

We also got to check out the famous utilidors, which are underneath the park, but technically not underground. Since the park is essentially built on swampland, they couldn't dig underground for the tunnels. Instead, the park is build on top of the tunnels. The utilidors are used by Cast Members to move within the park without being seen. They can also move food, merchandise, etc in a totally stealthy manner. Not only is this efficient, but it also maintains the element of show by not being disruptive--Keys to the Kingdom for the win! 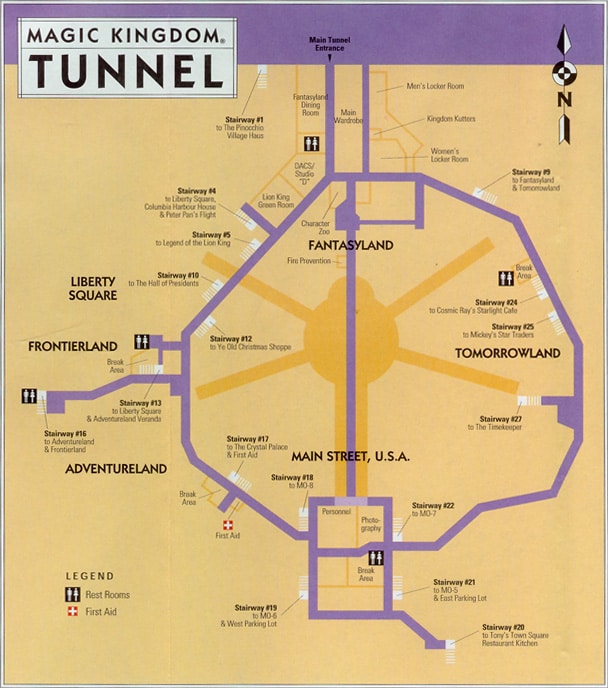 I can't possibly discuss the entire tour in a blog post (actually, I probably could, but it would take forever to write and read!), but I will tell you that I sincerely feel the tour was worth every penny. We got to take several looks behinds-the-scenes--we learned about the water systems that allow Splash Mountain to function, checked out storage for the floats from various parades, learned all about the "Go Away Green" painted buildings that are meant to blend into the background, and even saw the "Go Away Green" building that houses the Pirates of the Caribbean Ride... PS it's actually located in Frontierland.

After a really incredible Keys to the Kingdom Tour, and then hitting up several other rides over the remainder of the afternoon, it's time for our advanced dining reservation for dinner at Liberty Tree Tavern, right next to the Liberty Tree and the Liberty Bell. Now we're experts on all the trivia regarding this section of the park! By the way, I highly recommend reservations since this is such a popular spot. I saw many people turned away who were attempting to just walk in at the last minute, and even people with reservations were lined up waiting to check in. 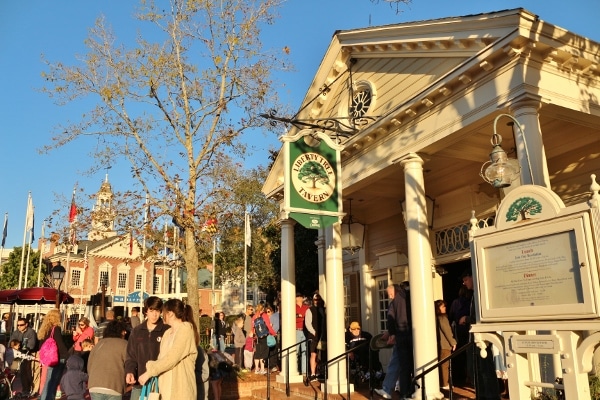 Each quaint room or section includes photographs and decorations inspired by said historical figure. We were seated in the Betsy Ross room, which includes a colonial-era American flag. 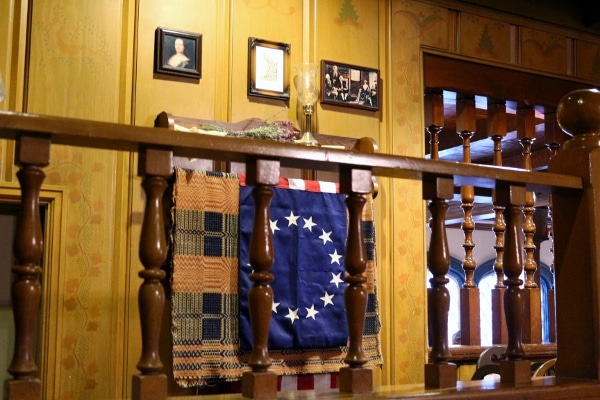 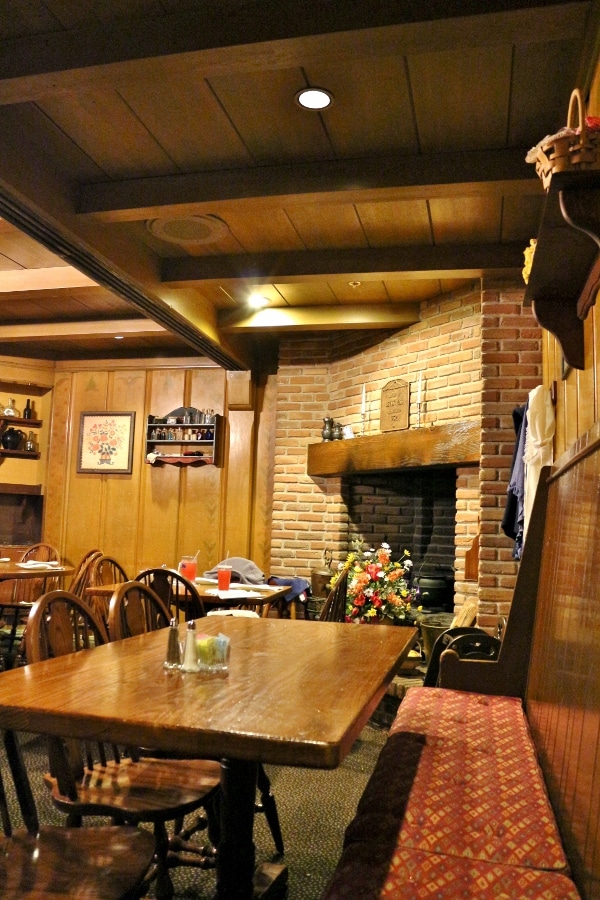 Lunch and dinner at Liberty Tree Tavern are two very different experiences. Lunch is a la carte, while dinner is an "all-you-care-to-enjoy" family style Thanksgiving dinner. The price for dinner can fluctuate throughout the year, and may cost more during peak season, but this is common for any of the all-you-can-eat dining experiences at Disney, whether it's a buffet or family-style meal. In early February, we paid $31.99. 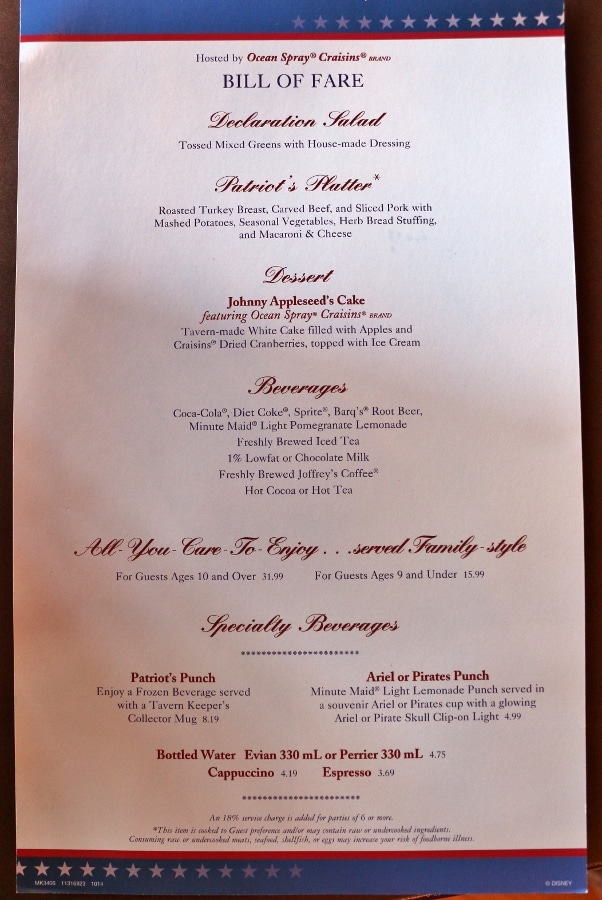 At dinnertime, drinks are included in the price of your meal, and since the Magic Kingdom is a dry park, with the exception of Be Our Guest, everything offered is non-alcoholic. I went with my standard unsweetened iced tea. 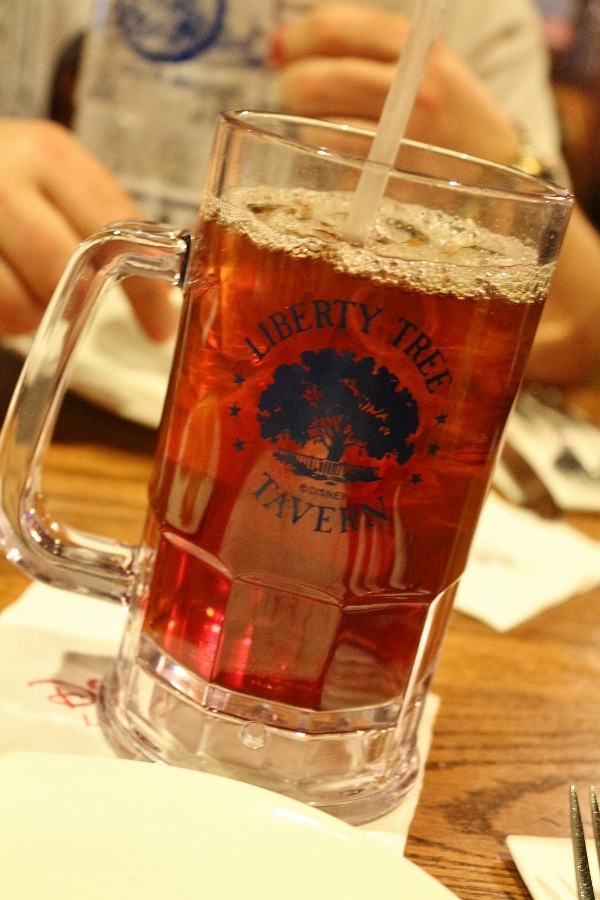 Everything is served family-style, and you can ask for more of anything. We begin with warm rolls and cornbread, served with butter. 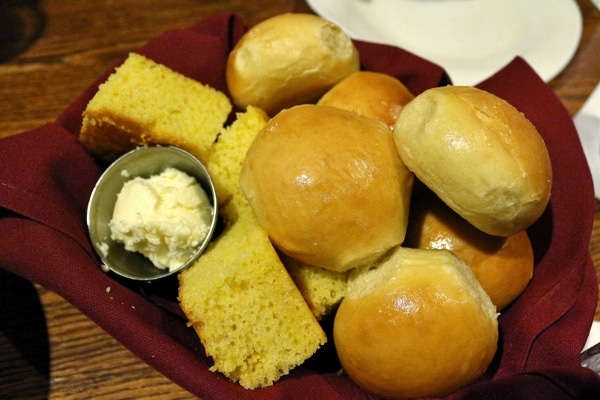 Declaration Salad consists of mixed greens and a side of homemade strawberry vinaigrette. I actually really enjoyed the vinaigrette, and thought it was less sweet than most berry vinaigrettes I've tried in the past. 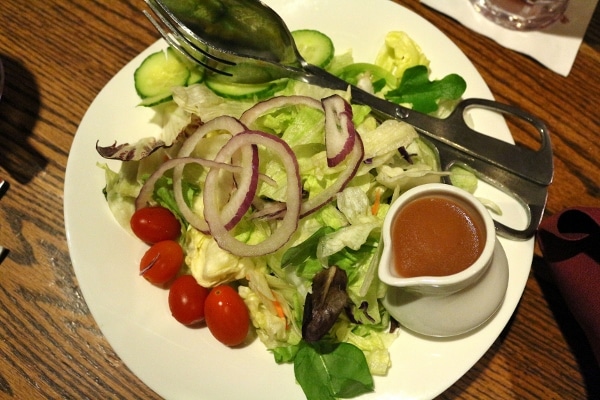 The salad course is followed by platters of Roasted Turkey Breast, Carved Beef, Sliced Pork, Mashed Potatoes, Seasonal Vegetables (we got a combination of roasted corn and green beans), Herb Bread Stuffing, and Macaroni and Cheese. Homemade Cranberry Sauce is available upon request. 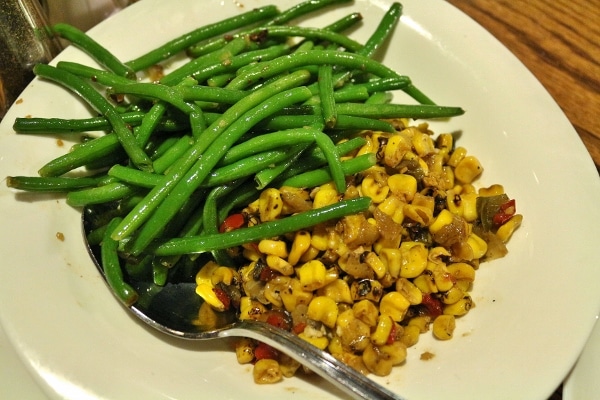 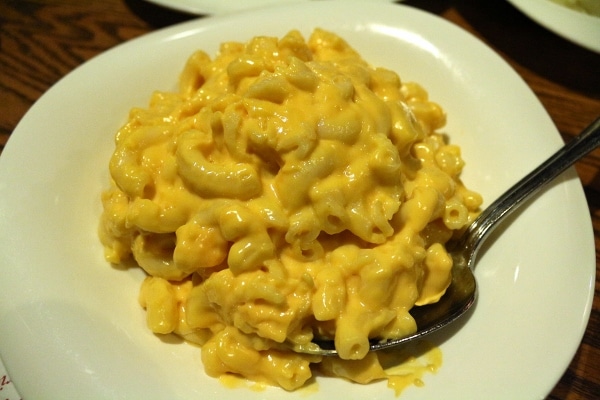 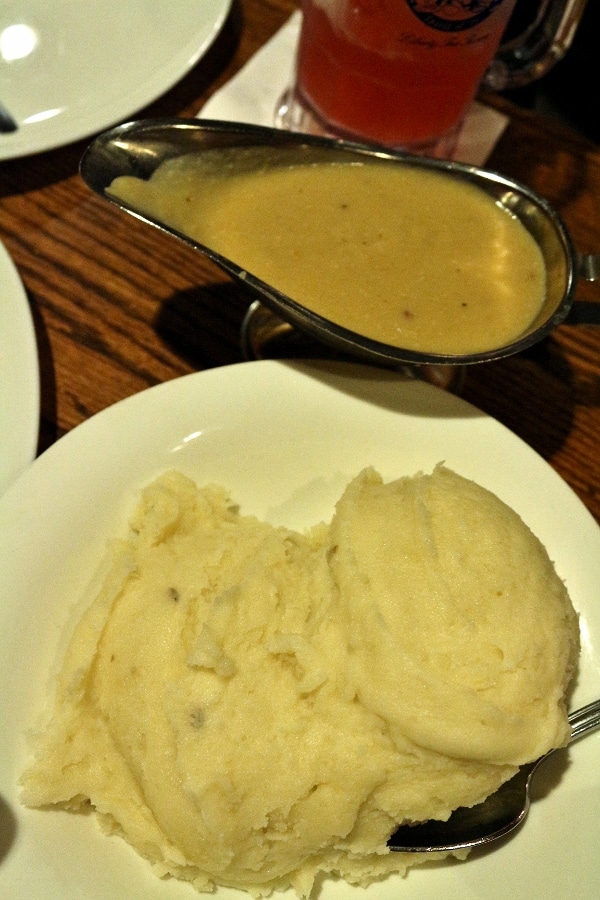 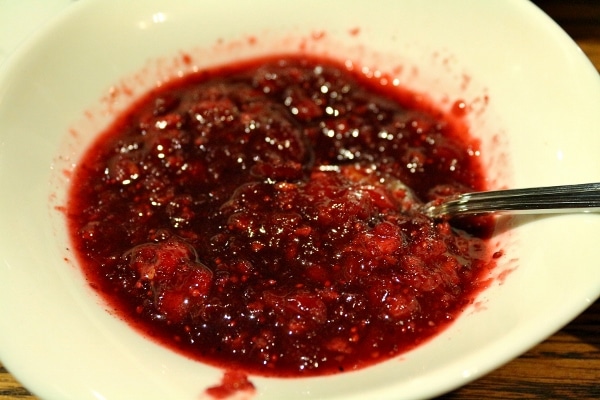 If you love Thanksgiving dinner, you will LOVE dinner at Liberty Tree Tavern. Between the three different types of roasted meat, and the array of side dishes, there's something here for everyone. And again, since it's all-you-can-eat, you can easily order more of anything your family deems most popular. 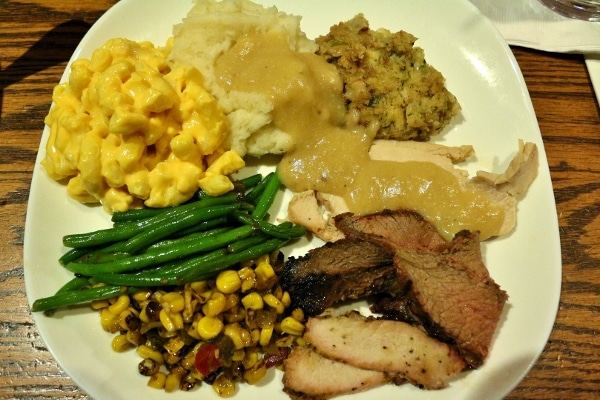 We actually over-ordered on the mashed potato front, and one of my dining companions was trying in vain to eat it all so he wouldn't feel ashamed to waste food. Our awesome server Doreen let us know that any of the leftover food is later used to feed animals (I'm guessing at Animal Kingdom?), so she said not to stress out or feel bad. I'm so relieved to hear that Disney has found a way to recycle uneaten food! 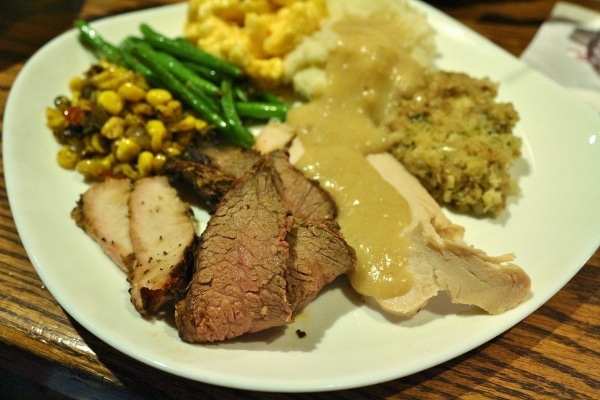 We basically had no room for dessert, but it's included in the meal so we tasted it anyway. Johnny Appleseed's Cake is basic white cake filled with apples and dried cranberries, and topped with ice cream. I must say, the cake is actually really delicious! It's about as classic as cake could be, a perfect reflection on the theme of the meal. 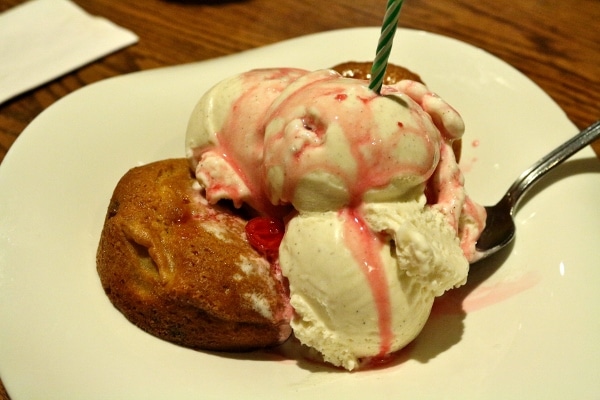 I absolutely loved dining at Liberty Tree Tavern, and plan to visit again on a future trip. Please note that Liberty Tree Tavern will be closing for a 6 month major refurbishment during the second half of 2015. I'm not entirely sure what changes this will entail, but I'm sure the colonial charm will remain intact. 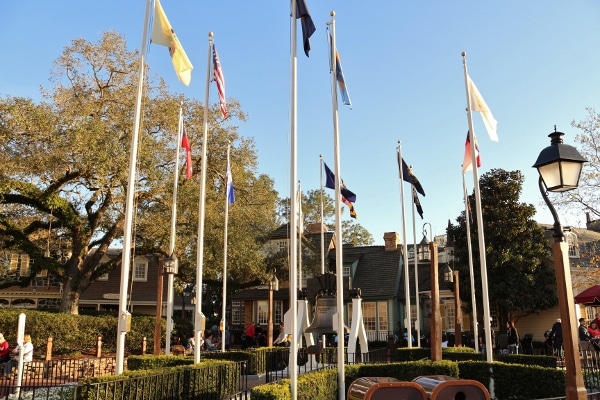