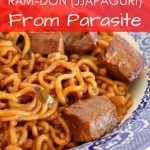 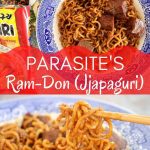 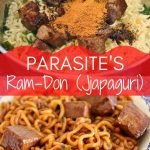 The instant noodle dish from Parasite is taking the internet and the world by storm! Ram-Don (more traditionally known as jjapaguri) gets an elevated twist with seared cubes of steak. This recipe is super easy to make, and crazy delicious!

The South Korean film Parasite has made history by being the first foreign language film to win the Academy Award for Best Motion Picture. It also took home the coveted awards for Best Original Screenplay, Best Director, and Best International Feature Film.

If you hadn't heard of the film prior to award season, I'm guessing you have by now. I highly recommend you see this film immediately, if not sooner!

The birth of a viral dish in Parasite

The film's central theme hovers around class disparities. This is showcased when an extremely poor family goes to work for an extremely affluent one.

One of the biggest examples of the disconnect between the classes comes from a simple request for a popular Korean instant noodle dish: jjapaguri (referred to as Ram-Don in the English subtitles).

In one of the scenes, the mother of the wealthy family calls home from the car and speaks with the housekeeper. They are 7 minutes away, and would like her to whip up this cheap and easy noodle dish.

But wait! Throw in some Hanwoo top sirloin beef! There's some hanging around in the fridge. Typical. Let's pause here for a moment.

Korean Hanwoo beef is akin to Japanese Kobe and other extremely expensive types of beef that are nearly impossible to procure in the States. Meanwhile they're definitely impossible for most instant noodle-eating folks to even afford!

The marriage of a cheap everyman's instant noodle dish with a completely unaffordable steak is the class-clashing result. It's the ultimate edible example of the film's theme of the haves and have-nots.

The actual Korean name for the dish featured in the film is jjapaguri. It's a combination of 2 different packages of instant noodles, and is therefore a combination of their names as well. Chapagetti + Neoguri = Jjapaguri.

The former is an instant noodle version of jjajangmyeon, a Korean dish featuring noodles in black bean sauce. The latter is a spicy seafood flavored instant noodle soup.

The translators of the film weren't able to translate jjapaguri into something that would resonate with English-speaking audiences. The result is "ram-don," a combination of the words ramen and udon. A star is born!

What does it taste like? If you're a fan of spicy Asian noodles, then this recipe will please your palate! It's unctuous and savory, with strong umami flavors, and is perfect for slurping off your chopsticks.

These ram-don noodles aren't healthy, but they are definitely crave-worthy! I think one recipe is plenty for 3 servings, but you can also make 2 larger servings. In Parasite it yields one ginormous serving.

Ram-don is a very quick-cooking dish! Start out by bringing 4 cups of water to a boil in a large saucepan or medium pot. Open both packages of Chapagetti and Neoguri.

This is the inventory you will have:

When the water is boiling add the noodles and vegetable flakes from both packages. Boil for only 2 to 3 minutes, and then strain over a bowl or large measuring cup. You'll need to reserve 1 cup of the cooking liquid for later.

Meanwhile, cube up 8 ounces of sirloin steak or rib-eye. Ideally ½-to-¾-inch cubes are good, but some of mine were a bit larger. Smaller cubes will be a bit easier to eat.

Add a little bit of oil to a frying pan over high heat. Sear the cubes of steak for a minute or 2 per side, until cooked to your desired doneness.

I use a large nonstick frying pan with some avocado oil pan spray. It doesn't stick and it doesn't splatter since it's a small amount of oil. Set aside.

Return the strained noodles/vegetable mixture to the pot with 1 cup of the reserved cooking liquid.

This is pretty spicy, so you definitely won't want to use all of it unless you really want to. I used right about ½ and thought it was a good level of spice--spicy but not unbearably spicy.

Mix until the sauce thickens and coats the noodles.

This yields 1 serving of ram-don noodles in the movie, but realistically this is 2 comfortable servings. I actually divided it up into 3 smaller servings and still felt quite satisfied! It's also pretty high in sodium, so I think smaller portions are just fine 😀 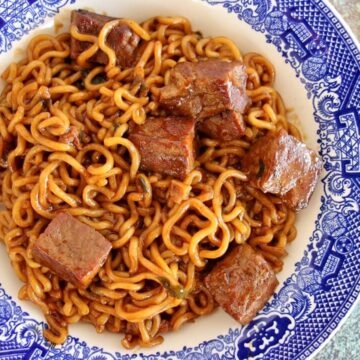