Japchae is a traditional Korean dish made with stir-fried sweet potato noodles, meat, and vegetables. This lovely, colorful creation may be heavy on the veggies, but it's not exactly healthy--there's quite a bit of sesame oil in it as well as vegetable oil for cooking.

Korean sweet potato noodles, or dangmyeon, are gluten-free and made of only sweet potato starch and water. They are a grayish color until they're cooked, and then become chewy and crystal clear (they're sometimes called glass noodles).

When mixed together with the meat, vegetables, and seasonings, they become shiny and slightly sweet with a pretty intense sesame flavor from the sesame oil and toasted sesame seeds.

Even though it's a bit tedious, cooking each vegetable separately is fundamental to this dish. Each ingredient has a different cooking time, and by cooking them individually, each one maintains its integrity, both in color and texture to make a beautiful and cohesive dish.

You can use several tender cuts of beef or even pork to add protein to the dish. I was able to get a small 4-ounce piece of grass fed non-GMO striploin (aka strip steak) on sale from Whole Foods.

The butcher was nice enough to cut me a smaller slice than what they had on display, and even trimmed the fat off for me. Even though you're only using a tiny bit of meat in the dish, using the good stuff does make a difference.

If you'd like to make this dish vegetarian, omit the meat and use a few more re-hydrated dried shiitake mushrooms in its place. 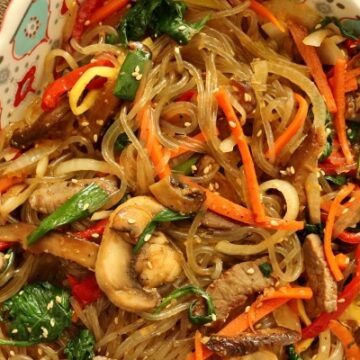