Baking with tea is a lot of fun! Try adapting a classic cream pie by making this Earl Grey variation served in a sugar cookie crust for added awesomeness.

I have an incredible love and appreciation for tea. Ever since I was a child I have enjoyed tea parties, from the beautiful porcelain china to the delicate and varied fragrant teas served within, from the flaky, buttery scones to the myriad of crustless sandwiches.

Tea is more than just tea, it's an experience, or at least it can be if you're willing to put in a little extra effort.

In the past I have really enjoyed using tea as an ingredient in certain dishes, such as Tea Souffles. I'm equally pie-obsessed as I am tea-obsessed, so I jumped at the opportunity to recently whip up a pie inspired by Earl Grey tea served with sugar cookies, a perfect pairing.

Instead of starting out with a traditional flaky crust, this pie transforms the cookies themselves into the crust. I attempted to roll out the cookie dough instead of pressing it into the pie dish, but the dough was too soft, even after chilling, and it just fell apart.

You can try your luck at rolling it out if you prefer, but I ended up just pressing the dough into the dish by hand. Also, beware of the baking times for the dough.

I often find that pie recipes don't call for enough baking time, and in my experience I always need to add more time. Your oven may differ, but I ended up baking my crust 15 minutes longer than the total amount the recipe suggests.

The crust was baked through, but not dried out. A cookie crust will not brown as much as a regular pie crust, so be careful not to overbake. Cookies always firm up as they cool, even if they seem a bit soft when pulled from the oven.

The filling for this pie is the simple result of steeping Earl Grey tea in hot milk, and then using that milk to make a pastry cream. After the filling sets, the final touch is a cloud of lightly sweetened whipped cream piled high over the top.

A single bite of this Earl Grey Cream Pie combines the sweet, buttery, sugar cookie base with the beloved flavor of bergamot orange-infused tea in the Earl Grey filling, and a light and delicate whipped cream floating over the top.

It's truly sublime for any tea/pie lover such as myself. I bet this would also be a fun idea to adapt into mini tartlets to serve as the sweet finish for an afternoon tea party! 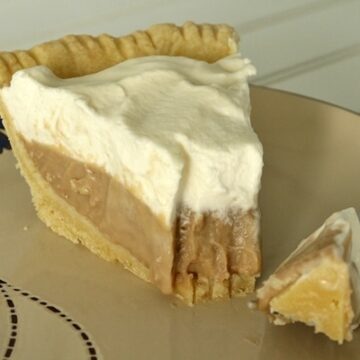 Adapted from Teeny’s Tour of Pie