A flavorful crust made from crushed gingersnaps is the vessel to hold an equally decadent filling of chocolate ganache spiced with cayenne pepper, ground ginger, and cinnamon.

It's not really spicy per se, but rather warms your throat a tad. It has way more character than a typical chocolate cream pie. It's slightly richer with a more truffle-like filling than a custard/pudding one.

If you're looking for a fun and festive dessert to ring in the Olympics this Mexican chocolate pie is a great choice. And while you're at it, stay tuned for posts from my upcoming Olympics party for more fun ideas for treats to make throughout the next couple weeks. 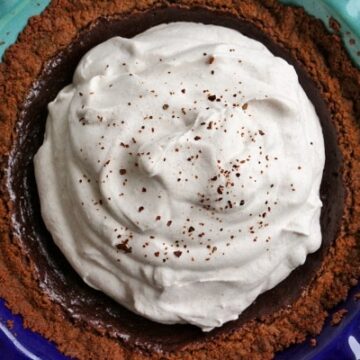