Happy Thanksgiving (a day early)!! For November's 5 Star Makeover, the theme was a pretty traditional Thanksgiving-inspired one: Green Bean Casserole. I have actually never had a green bean casserole in my entire life. I wasn't even entirely sure how it was made (other than featuring green beans and crispy onions).

I decided for my variation to make a quiche with the same flavor profile. A quiche is, in it's own way, a self-contained casserole. A quiche is also something I love and crave regardless of the season or day of the week. I've had quiche for dinner on many occasions 🙂

This quiche was deliciously vegetarian. I use frozen haricots verts from Trader Joe's (it's a lot cheaper than buying fresh and it's great quality). I prefer haricots verts to traditional green beans because they are a bit thinner and sweeter. When I made the quiche it didn't occur to me to cut the beans into even smaller bite-size pieces, but when I cut into the quiche it became very clear that cutting the beans would have been a great idea, so I included that note in the recipe below.

Definitely cut the beans, and also press out as much water as possible to keep your quiche from getting any extra liquid in it. It's something that happens when making quiche with vegetables especially because they release liquid, but making sure your veggies are cooked and void of excess water is a great start!

The caramelized onions and sauteed mushrooms add great character to the quiche as well, and of course cheese is practically mandatory. Gouda is a great melting cheese. I had a chunk leftover from making macaroni and cheese and thought it would be the perfect topping for the quiche. Any other melting cheese you have or prefer would be fine too. Cheddar, Monterey Jack and Gruyere would be other great options.

This custard is a fairly soft/loose one. It's the general ratio I always use for quiche and I've never had any complaints. I like it because it has a nice creamy aspect, but if you prefer a stiffer quiche, add another egg. Allowing the quiche to sit and rest before you cut into it or even making it in advance and then reheating it will also make it set a bit better and make for prettier slices. 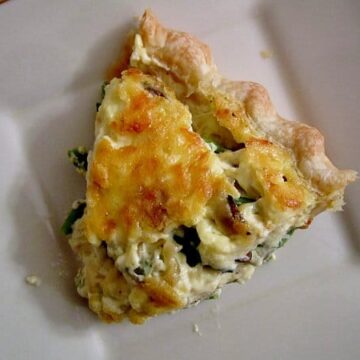