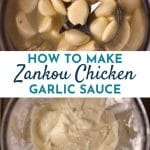 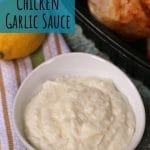 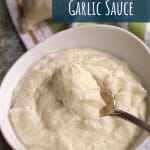 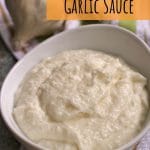 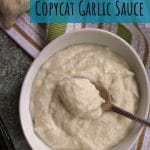 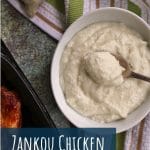 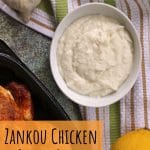 Zankou Chicken is an extremely popular Armenian-owned fast casual restaurant chain in the greater Los Angeles area. Most notably they're famous for their epic Zankou Chicken garlic sauce. The recipe is a guarded secret, but this easy copycat recipe is the next best thing!

Zankou Chicken is famous. It's a landmark chain in Los Angeles with outstanding Middle Eastern cuisine to back up its reputation. Musician Beck even sang about Zankou Chicken in his song "Debra." The well-known chain also has a tragic history, but through it all they serve up some of the best quick Middle Eastern fare around.

My first Zankou Chicken meal was in July 1999 during a visit to Los Angeles to see some family friends. I remember it well because it basically changed my life. Chicken would never taste the same to me without that incredibly pungent Zankou Chicken garlic sauce.

Years later I moved to Los Angeles and took advantage of the proximity to so many Zankou locations. The best chicken experience of my life was at my fingertips any time I wanted!

And then I moved back east again and my Zankou Chicken dreams went down the drain. Wah wah. I had to resort to smuggling garlic sauce in my luggage after visits to LA. It's just not the same.

You're probably wondering how spit-roasted chicken can be so exciting, but let me tell you it's not the chicken but the Armenian garlic sauce that put Zankou on the map. Yes, their chicken, shawarma, and other Middle Eastern delights are wonderful, but it's the garlic sauce people crave.

Toum is actually a Lebanese garlic sauce found in many Middle Eastern restaurants, often accompanying shawarma. It's basically a super intense garlic mayonnaise made with garlic, lemon juice, oil, and salt. It's like an eggless garlic mayo but with brightness and complexity from the addition of lemon juice. It also typically contains a lot of oil to help it get so thick.

Toum isn't shocking revelation. You can find a version of it on Halal carts in NYC, and in various Middle Eastern restaurants. But what makes Zankou so special?

This Armenian garlic paste is based on traditional toum, but it has a secret ingredient. My garlic sauce-loving forefathers at Chowhound already did some of the hard work figuring it out.

Surprise! It's potato. How do we know? Well, supposedly if you take some Zankou Chicken garlic paste and cook it in a pan, it will make a pancake. I haven't tried this test since I now live 3,000+ miles away, but I will take their word for it. From this you can deduce that it contains a type of starch, and the likely culprit is potato.

Some recipes call for a specific number of russet potatoes. But potatoes come in all shapes and sizes, so this isn't a great way to gauge how much you need for a successful recipe that can be replicated. I want everyone who tries this recipe to yield the same exact result, one that matches the garlic paste at Zankou as best as possible.

Other recipes use instant mashed potatoes, but I never buy that for my personal use so it doesn't make sense to buy it just for this. We'll stick with the humble russet potato for our version.

I decided to cook the potato and then measure out how much goes into the sauce, rather than saying a certain number of potatoes.

But how exactly do you use the potato? I tested out the recipe a few times. The first time I mashed the potato with a potato masher and whisked it in. The result was a tad lumpy. Not the smoother texture you get at Zankou.

Next, I used a food mill to basically rice my cooked potato and then stir it in, thinking this would dissolve the potato more. It still wasn't perfect. It had a texture to it like fine grains of rice throughout the sauce.

The solution! Blend it in the blender on the highest setting. I had avoided adding my potato to the blender because I was worried the starch would make it gummy. Fortunately, this didn't happen. My copycat Zankou Chicken garlic sauce turned out smooth, and the flavor is spot on! And as a bonus, it uses a lot less oil than traditional toum recipes.

Add ¼ cup fresh lemon juice and 1 ½ teaspoons kosher salt (PHOTO 1). Cover with the lid and puree on the highest setting.

You can technically enjoy the sauce at this stage. This is essentially a thinner version of toum (Lebanese garlic sauce). It's thick but pourable, and super garlicky. But we are taking it to the next level to fulfill our Zankou fantasies.

You need about 1 cup of cooked potato that has been put through a ricer or food mill (measure it AFTER you rice it). Technically you could mash it too, but it will do a better job getting the potato super fine if you do it this way. If you have a digital scale, it should be somewhere between 4 and 4 ¼ ounces of cooked, riced potato.

If you are using mashed potato instead of riced potato, the potato will be a bit more compacted from the mashing process, and you may want to start with less than 1 cup (or simply weigh it like I suggest) and then add more if you feel the need.

Add the riced potato to your blender and puree on the highest setting. Stop, scrape, and blend again until it's very smooth. It shouldn't take long at all (PHOTOS 3-4).

Transfer the garlic sauce to a container, cover and refrigerate for a few hours or overnight. It really benefits from having some time for the flavors to meld and mellow, but you CAN enjoy it immediately if you don't have time (I've done this countless times when I didn't plan ahead). Afterwards, taste it and adjust the seasoning if needed.

Voilà! Now you can make Zankou Chicken garlic sauce no matter where in the world you live!

Ways to use it

You can enjoy this Armenian garlic sauce in countless ways. Here are a few suggestions to get you started:

Are you as Zankou obsessed as I am? Ever dreamed of your own personal supply of that addictive Armenian garlic paste? Well, I'm super excited that this copycat recipe is spot on! It's also gluten-free, dairy-free, and eggless. 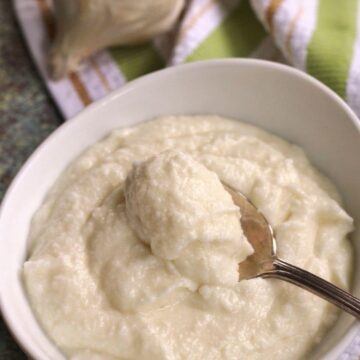