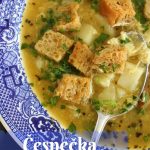 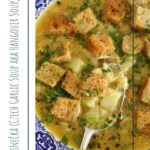 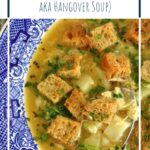 Czech Garlic Soup, aka Česnečka or Hangover Soup, is regarded as a cure for all ailments, including the common cold and of course hangovers. It boasts garlic, potatoes, and crunchy rye bread croutons!

After visiting Prague recently I became very intrigued by Czech cooking. Some Czech recipes have roots in other Central European cuisines, such as German, Austrian, or Hungarian. Others truly have a uniquely Czech spin on them.

While a lot of Czech food is rustic, rich, and not very glamorous, the flavors are quite delicious! I'm excited to create some Czech recipes of my own in the coming months.

This past weekend I felt myself coming down with a cold. Boo! During my visit to Prague I had heard of a Czech garlic soup called Česnečka aka "hangover soup." It's laden with garlic, and is considered a fix for other ailments including the common cold.

The timing couldn't be more perfect! Garlic has proven antibiotic and antiviral properties. Therefore it makes sense that a soup enriched with loads and loads of garlic would be a great cold remedy. And also, it keeps the vampires away (Halloween's approaching y'all--better safe than sorry!).

I researched Česnečka and noted it is an extremely straightforward dish with ingredients that most people may already have in their refrigerator and pantry. The standard ingredients include garlic, potatoes, and broth.

I only had to purchase rye bread for the croutons, but had everything else on hand. Most recipes are nearly identical since it's quite a basic soup, but there are some variances.

A couple of ingredients you may need to pick up include dried marjoram (although dried oregano is an ok substitute) and caraway seeds. These seem to be common in Czech cooking. I ate French onion soup in Prague, and even that contained caraway seeds!

Should I include the optional ingredients?

From my research I would say that chopped onions are not typical, but some people add them anyway (I didn't). Czech Garlic Soup often includes some cubed or shredded cheese. The cheese melts and modifies the flavor and texture of the soup.

Also, a beaten egg is added in more classic recipes, yielding ribbons of egg similar to a Chinese egg drop soup. Typically, you top the soup with rye bread croutons as the final step.

In my rendition of Česnečka, I stick with much of the classic components. Initially I served a couple bowls of soup sans egg and cheese, but the following day reheated the leftover soup on the stove top and stirred in half a beaten egg, and served it with a bit of cheese in the bowl for comparison (the photos represent the batch with beaten egg added).

Honestly, both versions are equally delicious in my opinion. In the recipe below the egg and cheese are both optional. They are not necessary but both add a bit of extra flavor, texture, and protein.

Česnečka itself of quite garlicky and incredibly satisfying and comforting, especially when one is battling a cold or hangover (though the latter is luckily something I haven't experienced in years!).

I really fell in love with this garlic-bomb of a soup, its ease of preparation, and the comfort it provides. I plan to add it to my winter arsenal as I know there will be more sniffles and sneezes in the coming months. It's so delicious even if you're not sick, so seriously give it a try!

Czech Garlic Soup is also known as Česnečka in Czech or Hangover Soup. It's regarded as a cure for all ailments, including the common cold and of course hangovers. It is extremely garlicky, and utterly satisfying and comforting on the coldest winter days.
4.91 from 32 votes
Print Pin Rate
Course: Soup
Cuisine: Czech
Prep Time: 10 minutes
Cook Time: 30 minutes
Total Time: 40 minutes
Servings: 4 servings
Calories: 696kcal
Author: Victoria
Prevent your screen from going dark

Substitute dried oregano if you don’t have dried marjoram. It's close but not identical.