This copycat version of the bacon and cherry pepper topped SmokeShack Burger from Shake Shack tastes as good as the original, and is easy to make!

I have been mildly obsessed with Shake Shack for over a decade. I fell in love with it in New York City, and have enjoyed their delicious food in several other states as the burger chain has expanded (it's actually international now!).

When they released a cookbook a couple years ago I knew I had to have it. It's full of mostly stories, but many recipes as well, some of which are considered "close enough" to the original. They can't spill all their secrets, of course.

The SmokeShack is one of my favorite Shake Shack burgers, and it's easy to recreate. I don't follow all the directions to a T, although the original recipe is below in case you prefer to griddle your burger and buns.

My burger patties are grilled the old fashioned way, seasoned with a bit more than just salt and pepper (garlic and onion powders add a bit more flavor), and my lightly grilled buns are not potato buns, although I do love a good potato bun!

Regardless to how closely you stick to the original method of prep, this burger is fantastic! The crispy bacon, spicy cherry peppers, gooey cheese, and look-alike ShackSauce really come together to make one hell of a burger. You're so welcome! 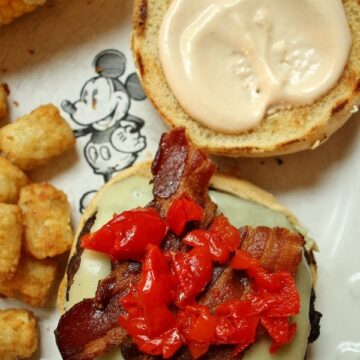