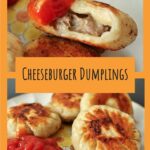 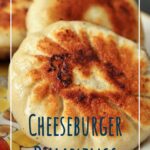 This fun and creative recipe for cheeseburger dumplings is inspired by classic American cheeseburgers, but assembled and served like Asian dumplings. Serve with plenty of ketchup for dipping!

The Creative Cooking Crew challenge for the month of February was to "substitute, elevate, or transform" a typical burger. I decided to take this challenge in the direction of transforming a cheeseburger into a dumpling. I'm sure none of you are shocked by this. I'm kind of dumpling obsessed.

Instead of creating a typical dumpling shape, I decided to make large, flat, round dumplings in a puck shape and pan-fry them. This is more along the lines of a burger shape, and essentially the size of a slider. You can find step-by-step photos of how to create these puck-shaped dumplings on my Chinese chive dumplings post.

The filling is comprised of ground beef and seasonings. These include mustard and Worcestershire sauce as well as some grated Cheddar cheese.

You can easily make some tweaks to this basic recipe to add your favorite burger fixings. Try caramelized onions, sautéed chopped mushrooms, and crispy chopped bacon. Personally, I think they're perfect just the way they are.

There's a place called Ted's Restaurant in Meriden, CT which is famous for their steamed cheeseburgers. Although I've never tried one, I've seen them featured on television. Basically, the patties and cheese are steamed separately, and then put together on buns to create incredibly juicy burgers.

When this dumpling filling is wrapped tightly with the dough and then pan-fried (a two-step process that both crisps and steams them), the filling steams within the dough and yields a result not unlike these famous burgers.

When you bite into the crispy and chewy exterior, the first thing you notice is a burst of juicy, cheesy goodness. It's as if the juiciness from the steamed beef filling combines with the melted cheese to create a cheesy broth that is as luscious as it sounds.

I went a little light on the seasonings. Dumplings generally sway on the lightly seasoned side because they almost always are enjoyed with a somewhat salty dipping sauce). Feel free to add more if you prefer, although I think dipping these dumplings in ketchup is the way to go and creates a perfect balance of flavor.

They taste exactly like a juicy cheeseburger with ketchup, but with an extra awesome crispy and chewy "bun." And for the record, even though these look like Chinese pan-fried buns (or bao), I didn't use actual bao dough (which contains yeast), which is why they're still dumplings and not buns. 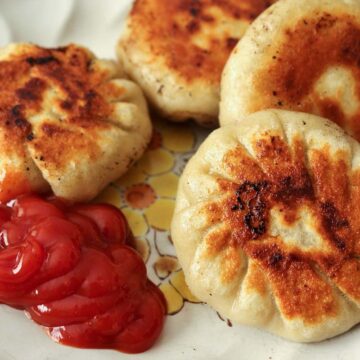 Feel free to dress up these dumplings by adding some of your favorite burger fixings into the dumplings. You could add some caramelized onions, sauteed chopped mushrooms, or even crisp, chopped bacon right into the filling. Dough/assembly adapted from Asian Dumplings