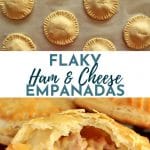 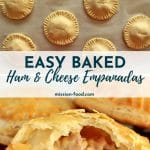 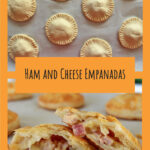 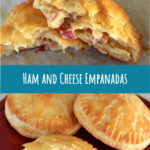 These flaky Ham and Cheese Empanadas feature a deliciously creamy and cheesy filling studded with smoky bites of ham. They are common among various Latin American countries including Cuba, Argentina, and Chile.

Ham and cheese isn't a flavor combination that I would normally consider to be Latin American. But after further thought the mixture of ham, cheese, and mustard reminds me of a Cuban sandwich, minus the roast pork and pickle. I've actually made Cuban Sandwich Empandas in the past, which are truly exceptional (you've got to try them!).

This particular recipe for classic ham and cheese empanadas hails from Cuba, Central America, Chile, and Argentina. It seems to be popular throughout many countries in Latin America. They're baked, not fried, so that's less of a mess in your kitchen!

Flaky, tender, slightly sweet dough encases a creamy, salty, cheesy, tangy filling. These puffy little empanadas are a real treat! They are a great fusion of a beloved American flavor combination (ham and cheese) with a Latin American staple (empanadas).

Empanadas are excellent appetizers or snacks, so I love including them on menus for game night! I also like to take them with me when I travel as a simple hand-held meal on the go. Ideally, they are best warm, but you may also enjoy them at room temperature.

Making the filling for these ham and cheese empanadas is an absolute breeze. In a medium bowl combine chopped cooked ham, shredded cheese, creamy mayonnaise, and tangy mustard. Chill the filling for 30 minutes to 24 hours.

The dough comes together quickly and easily in your food processor. It's bound with a combination of cold unsalted butter and cream cheese. A bit of sugar adds some sweetness to this flaky dough, which is a nice contrast to the savory filling.

After blitzing this easy dough in your food processor, wrap it up and chill it for 30 minutes to 48 hours.

Next it's time to assemble the ham and cheese empanadas! Roll out the dough on a well-floured surface until it's about ⅛-inch thick, like a pie crust. Cut out 28 rounds with a 3 ½-inch round cutter. Gather and re-roll the scraps as needed until you have 28 circles.

To assemble, top half the dough rounds with an equal amount of filling, a generous tablespoon worth.

Brush the edges with egg wash, and top with another round of dough. Press out any air, and use your fingers to seal the dough edges together. Follow up with a fork to create a crimped pattern around the perimeter. This will also help seal in the filling.

Chill the assembled empanadas for another 20 minutes while you preheat your oven. Brush the tops with more egg wash, and bake until golden and flaky. Serve these delicious morsels warm!

To freeze the unbaked ham and cheese empanadas, do not brush the tops with egg wash. Place them in one layer on the prepared baking sheets and freeze them until solid. Transfer them to freezer-safe bags or bins and keep them frozen for up to 4 months.

To bake from a frozen state, Bake them directly from the freezer. Brush the tops of the frozen empanadas with the egg wash, then bake as directed. Add 3 to 5 minutes to the baking time, or bake until the empanadas are lightly golden. 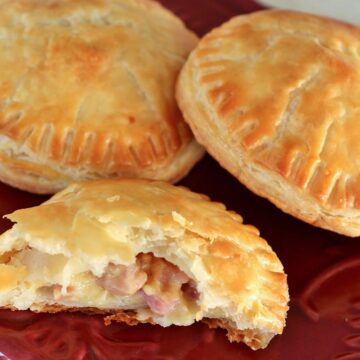