These Cuban Sandwich Empanadas are a creative twist on empanadas filled with the flavors of a classic Cuban sandwich! These flaky baked empanadas will be a hit at your next get-together.

These Cuban Sandwich Empanadas are perfect for game night or really any gathering with friends or family. They feature elements inspired by the classic Cubano, but in an adorable hand-held empanada package.

Although the roast pork filling isn't super authentic Cuban, I like that the pork is essentially slow-roasted/braised in a mustardy concoction, which steeps that necessary mustard flavor from a traditional Cuban sandwich straight into the pork without having to add extra mustard to the empanada.

I did end up with a lot of extra sauce even after shredding my pork and tossing it around in the sauce to moisten it, so I used a slotted spoon to remove the pork from the sauce before assembling so I wouldn't end up with soggy empanada filling.

In addition to the slow-roasted pork, the classic additions of sliced ham, Swiss cheese, and pickles are perfection.

I actually cut down the amount of cheese. The original recipe called for 16 slices Swiss cheese (2 per empanada) but Swiss cheese slices can be pretty large especially if you get them at the deli, so I actually used only 8 slices, each of which I cut in half and placed one half on the bottom and one on top of the filling.

I had baby dill pickles and not regular pickles, so I sliced some of those up and used an extra slice per empanada since they are smaller.

Also, please note that although the original recipe states it yields 8 small empanadas, I would use the term large to refer to these bad boys. Each Cuban sandwich empanada is about 5 inches across. Not small and easily shareable.

The flavor is huge. Although I baked and didn't fry, the buttery crust was flaky and delicious, while the piping hot filling was the perfect balance of smokiness from the ham, gooeyness from the cheese, juiciness from the mustardy pork, with acidity from the pickles.

Everyone who tried one said it was awesome, and I can't help but agree! These Cuban sandwich empanadas will make it onto a future game day menu again regardless of the sport or activity. 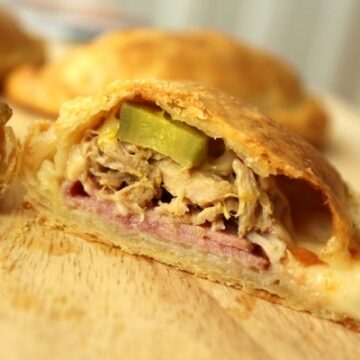