These creative Chinese dumplings are inspired by spicy General Tso's chicken, a Chinese-American classic. You can find the originals at Nine Dragons at Walt Disney World's Epcot theme park, or make them yourselves with this recipe!

For the record, I have never dined at Nine Dragons at Walt Disney World's Epcot in the World Showcase, but this is the second recipe I am featuring from there. The first recipe I tried was their Honey Sesame Chicken (delicious!).

I have read reviews of the restaurant and each one of them swooned over the General Tso's Chicken Dumplings, so I reached out to Disney to see if they would share the recipe. They did!

Their recipe had some gaps, however. For one thing, it didn't include a recipe for the dipping sauce, which is described on the menu as a Chinese red sauce. Reviews have described it as a barbecue style sauce. I used my imagination to create the sauce I envisioned.

The recipe also originally used store-bought wrappers, and said the filling would be enough for 10 dumplings.

Well let me assure you, this filling was more than enough for 32 dumplings. That's a much safer number. I personally love making my dumpling wrappers from scratch and so of course this dumpling adventure was no exception.

You can easily substitute store-bought wrappers, but I will totally judge you. Seriously. If I can do it, you can do it. Take pride in your cooking!

The only other change I've made in the recipe below (other than adding a lot more information to the method of prep to alleviate things, and using chicken breast instead of thighs) is to cut down on the amount of black pepper.

At first bite it wasn't that bad, but a few dumplings in you start to feel the burn in the back of your throat. It just gets more and more overwhelming. Totally different burn than you get with hot sauce, trust me.

My brother-in-law LOVED the dumplings exactly as they were, black pepper and all, but in the future I would definitely scale back the black pepper by half, and this is the measurement I have included in the recipe below. 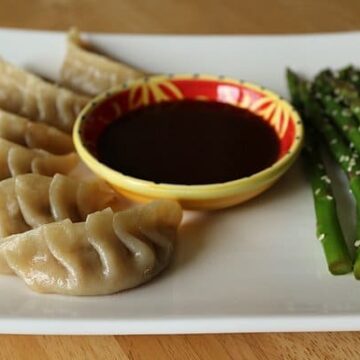