These aromatic cinnamon honey scones hail from Bouchon Bakery! They are absolutely decadent, and a delicious way to start the day.

These Cinnamon Honey Scones are gorgeous with a marbled look of cinnamon honey cubes mixed into the dough.

This scone recipe requires the dough to be shaped, refrigerated, then cut into pieces and frozen. The scones are baked from a frozen state which does make it easier to satisfy a last minute scone craving if you keep a stash of these in your freezer for lazy Sunday mornings.

I included the original honey butter glaze recipe, but would like to point out that I halved it and thought it was just enough glaze for my 12 scones. A little extra glaze wouldn't hurt though if you made the full amount.

These cinnamon honey scones are not only beautifully marbled and aesthetically pleasing, but they are incredibly tender and oh so delicately sweet. Nothing worse than overly sweet scones and these are just perfect on the sweetness scale.

The touch of sweet glaze on top adds just a bit of shine and an extra pop of honey flavor. The cinnamon flavor is quite mild because it is only found in the streaks from the cinnamon honey cubes.

I prefer this affect as opposed to just mixing cinnamon into the base dough, which would dilute the flavor more. It would also lack the aesthetic appeal of the cubes. 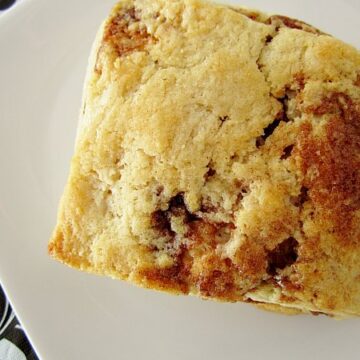