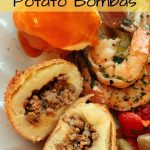 Potato Bombas are breaded and fried mashed potato balls with meat filling. An invention hailing from the Barceloneta beach-side neighborhood of Barcelona, these are must-have tapas when visiting Barcelona. If a trip to Barcelona is not on the horizon right now, make them yourself with this recipe!

I returned from a trip to Barcelona incredibly inspired by the food there. There were many dishes I wanted to recreate, so I decided to plan an ode to Barcelona in the form of a tapas party for my family. There are many dishes from our trip that didn't make it onto the menu. I simply had to limit the number of dishes, but I hope to try others in the future.

I purchased a variety of Spanish cheeses from Whole Foods to create a Spanish cheese board. These include 6 month aged Manchego (sheep's milk cheese), Capricho de Cabra (soft goat's cheese), and Drunken Goat (aged goat's cheese with edible red wine rind). The latter two are from the same cheese maker.

I also was able to procure Serrano ham there as well (I later found some at Aldi as well). It's from a different breed of pig, and not nearly as amazing as jamón ibérico. But it's the best I could do with my resources stateside, and reminds me a bit of prosciutto. The jumbo green olives are pre-stuffed with sun-dried tomatoes. I purchased them from the World Market section at Bed, Bath, and Beyond.

When we were in Barcelona, we ate pan con tomate more than any other tapas dish. Everywhere it was made with different types of bread. On this occasion I used ciabatta bread, split and light toasted, rubbed with fresh whole garlic cloves, halved tomatoes and a light drizzle of extra-virgin olive oil. So simple and so incredibly good! I also made some gluten-free pan con tomate on gluten-free baguettes for my nephews!

The birthplace of Potato Bombas

Potato bombas were actually invented at La Cova Fumada in the Barceloneta neighborhood of Barcelona. You may recall from my Barcelona blog posts that I had planned lunch one day in Barceloneta.

Well, my plan was to eat at La Cova Fumada, the birthplace of these famous potato bombs. But that unfortunately didn't happen on this trip due to a few circumstances. I still managed to eat potato bombas on two other occasions in Barcelona. It was so memorable that I absolutely had to try making them myself at home.

How to make Potato Bombas

Our favorite bombas from the trip were filled with stewed beef. The more traditional version, however, uses ground meat as the filling. Make the filling by sauteing chopped onion, and then adding a combination of ground beef and pork. Cook until the meat is cooked through and crumbly, then add grated tomato and spices. Set aside to cool until you're ready to assemble the potato bombas.

Next, make mashed potatoes. Simply peel and cube up potatoes, and boil them in salted water until tender. Then drain and mash them with olive oil and seasonings. Once the potato mixture is cool, add a beaten egg. I yielded 21 bombas.

Small discrepancies in measurements, or depending on how much you peel your potatoes may fluctuate that number a tad. You'll just want to aim for about ¼ cup potato and 1 tablespoon filling per bomba. Using a measuring cup and spoon will save the day and yield more accurate and evenly sized potato bombas.

Although there are a number of steps, the recipe is actually not very difficult. It just requires a bit of planning and patience. The different components are quite easy to make and the potato bombas themselves are pretty easy to assemble as well.

I was worried shaping them would be messy, but it wasn't bad at all. Use a deep fryer to cook these if you can. I highly recommend this since it keeps the oil temperature steady, and doesn't make a huge mess on my stove top. They fry very quickly, at only about 2 minutes each.

What to do with leftover allioli and bravas sauce

There are two sauces that go on the potato bombas: garlicky, mayonnaise-based allioli sauce, and spicy, smoky bravas sauce. You may end up with some leftovers of both, but there's a lot of great things you can do with them! I used some of my leftover sauces to make what I'm calling "trashy" huevos cabreados, or angry eggs.

Huevos cabreados were one of my favorite discoveries in Barcelona. We really didn't know what to expect, but were floored by how much we loved this dish of french fries, bravas sauce, and allioli topped with a fried egg which was sliced table side and tossed together.

I recreated it in the trashiest, most American way possible: with frozen tator tots baked until crisp in my toaster oven. This was a super easy rendition of the original, and I didn't even need to heat up my deep fryer or slice a single potato into matchsticks. I just drizzled the two sauces over the top of my tator tots, finished with the egg, and viola!

Have you ever eaten Spanish tapas before? What are some of your favorites? Tell me in the comments. And don't forget to rate this recipe if you've tried it. Thanks 🙂 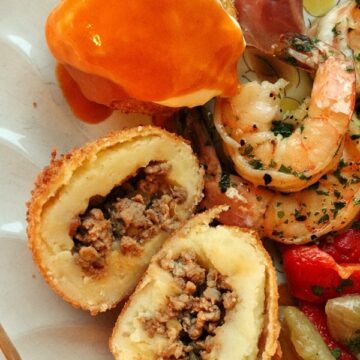