Happy New Year!! It's officially 2013 and I can't think of a better way to start it than sharing one of my favorite recipes. These are easily some of the best cupcakes I've ever made. Ever. That's a pretty bold statement, but I am backing it up with these amazing cupcakes.

They encompass one of the greatest flavor combinations in the history of the world... chocolate and peanut butter. It's just layer upon layer of deliciousness. Literally, there are layers of peanut butter and chocolate that just create a symphony of flavor. They are simply perfect in their glory.

PS These cupcakes may not be the best way to start the year if your resolution is to eat less cupcakes. But I know we all break our resolutions sooner or later, so keep this in the vault for that day you break down and need some guilty indulgence 😉 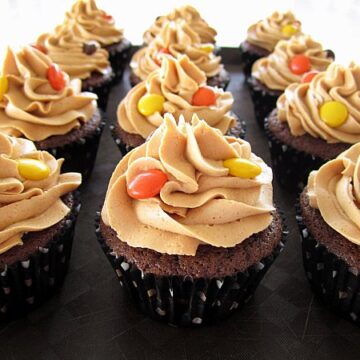 I have also tried making these cupcakes by placing the peanut butter cup directly in the paper liner and topping with batter. This is a really bad idea because the chocolate melts and sticks to the paper, making it very difficult to peel. Adding some batter to the base gives it just enough coating to peel more easily from the paper. Definitely don’t skip that step.