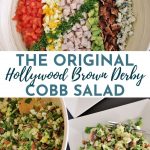 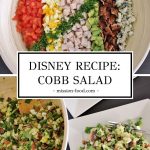 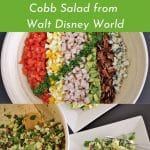 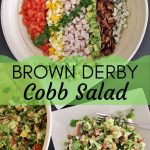 A classic and perennial favorite, The Hollywood Brown Derby Cobb Salad is the original chopped salad. Once served to Hollywood's elite, it's accessible to everyone now at Walt Disney World. It's also easy to make on your own with this recipe!

Cobb salad is hands down my favorite salad. It was invented in 1937 at The Hollywood Brown Derby by its owner Bob Cobb and theater magnate Sid Grauman to satisfy a late-night urge for a snack.

There are slight variations of this salad. Some use chicken versus turkey, or present the greens differently. The Hollywood Brown Derby way is to finely chop all the ingredients, likely making this the original chopped salad.

How to make it!

I actually have two versions of the recipe. One is in the Cooking with Mickey and the Disney Chefs cookbook. The other is on a recipe card from The Hollywood Brown Derby restaurant at Disney's Hollywood Studios. They are nearly identical except for the quantities and selection of greens.

I used my judgement and took the liberty of making some adjustments to the quantities based on my experience. I definitely feel that 1 cup of each is not enough for the large quantity of toppings. Meanwhile, 2 half-heads of lettuce, a bunch of chicory and ½ a bunch of watercress is way too much.

In addition to the plethora of greens, this salad requires a handful of other ingredients. It can be time consuming to prep everything, but it makes all the difference to get it right.

The quantity of greens I used felt like a good balance between the greens and the toppings. It was also the perfect amount for the ⅔ cup dressing. The original recipe also calls for 1 pound of turkey, which is a lot! I use ½ a pound, and think any more would overwhelm the other ingredients My adjustments are below.

Although it's not specified in the original recipe, I'd aim to chop everything into about ¼-inch pieces, from the greens to the toppings. Some shortcuts are fine. You can purchase a slab of roasted turkey from the deli counter instead of poaching your own turkey breast.

You'll want to peel and seed your tomatoes otherwise you will have watery tomatoes. Trust me having the skins off makes a huge difference in elevating this salad.

The dressing is classified as "French dressing," but really it's a simple vinaigrette. Maybe that's why they call it French. Although it's nothing like the gloppy orange-hued French dressing sold in bottles. This salad is much classier. After all, it was eaten by Hollywood's finest for decades, and is still enjoyed today.

Have you ever tried Cobb salad? It's not always served as super chopped as this one, but I absolutely love this original recipe! Don't forget to leave me a comment if you've tried this, and please rate the recipe as well. Thanks! 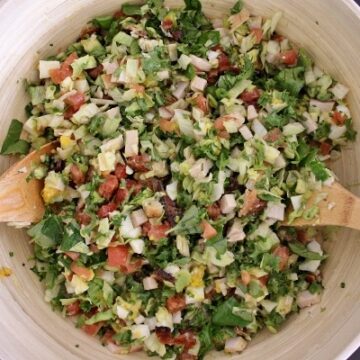 A classic and perennial favorite, The Hollywood Brown Derby Cobb Salad is the original chopped salad. Once served to Hollywood's elite, it's accessible to everyone now at Walt Disney World. It's also easy to make on your own with this recipe!
5 from 1 vote
Print Pin Rate
Course: Main Course, Salad
Cuisine: American
Prep Time: 30 minutes
Total Time: 30 minutes
Servings: 4 servings
Calories: 715kcal
Author: Victoria
Prevent your screen from going dark

Adapted from Cooking with Mickey and the Disney Chefs