Gnocchi versus gnudi: a conundrum. I have always found these two to be incredibly similar. They are both small dumplings served like pasta. They are both meant to be light in texture. While gnocchi can be chewy and heavier, it really shouldn't be, and therefore saying it differs from gnudi because of a chewier texture isn't giving gnocchi its proper credit.

A proper gnocchi should be light and fluffy. It shouldn't be overworked. Typically gnocchi is made from potatoes, but it can also be made from things such as pumpkin and sweet potatoes. I've also had ricotta gnocchi that was truly as light as air.

Gnudi literally means "naked" in Italian and refers to a naked ravioli, meaning the ravioli filling without the pasta wrapper. Therefore, it is most typically made with ricotta cheese and often also contains spinach or other greens or cheeses that may be found typically in ravioli. It tends to use less flour than gnocchi, making it light in texture.

The part where I get confused is where ricotta gnocchi differs from gnudi, since both are ricotta-based and are theoretically not as heavy per se as a potato gnocchi (which shouldn't be heavy either; I stand by my assessment). Personally, I think once ricotta enters the equation, all bets are off. You can call it whatever you want.

I've seen gnudi often shaped into balls, which may somewhat add to its definition, making it different from the typical cylindrical gnocchi shape. I've also seen gnudi that looked a lot like gnocchi. Once again, there is a fine line separating the two ricotta dumplings.

In this case, the recipe I tried from Marc Vetri's Rustic Italian Food (which I reviewed last spring) called it gnudi. Unable to find ricotta impastata, I drained my whole-milk ricotta in a strainer lined with cheesecloth overnight. It yielded a very thick product which worked perfectly in this gnudi.

Mixed with spinach, an egg, flour and some seasonings, it was incredibly easy to put together, even though it required a bit of advance prep with the straining of the cheese. I worried that it may be too much flour to yield such a light gnudi/gnocchi, and although it piped easily I thought cutting back a touch on the flour wouldn't have hurt either.

Also, the recipe said to pipe balls, but mine were more cylindrical in shape, and for the most part I left them that way. I could have rolled each one more into a ball shape in the flour, but I liked the rustic look of having them slightly mismatched (some more rounded than others).

I didn't overwork the mixture, praying for light-as-air dumplings. Even though the amount of flour made me a touch nervous at first, my gnudi were pillowy and light. They were absolutely tender, the texture I had envisioned!

Vetri serves these gnudi in a simple brown butter sauce, which is pretty common for gnudi. I wanted something a bit less rich and a bit more colorful. Introduce Marcella Hazan's tomato sauce with butter and onion.

Hazan's recipe has you cook down the tomatoes with butter and onion, then remove the onion. The broken down tomatoes are left in pieces. I wanted a smooth and creamy sauce, and so I blended mine. I think for gnudi, a smooth sauce is much more appealing, whereas the chunkier version would be excellent tossed with long strands of pasta.

In the end, it doesn't matter whether you want to call these gnudi or ricotta gnocchi. I'm not Italian. I won't take offense either way. They are pillowy, fluffy, tender, and delicious.

They're adorable whether shaped into perfect little balls, or more rigid-looking cylinders. They are absolutely exquisite served with the creamy and light tomato-butter sauce. These dumplings are an ace in the hole. Simple to make, they belong on every cook's repertoire. 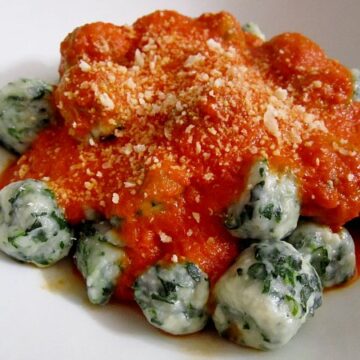 Tomato Sauce with Butter and Onion: