I recently made donuts for the very first time when reviewing a cookbook entitled Glazed, Filled, Sugared & Dipped. They were apple cider ones and they were fabulously seasonal and delicious. I got the donut-frying bug in me and was already looking forward to other opportunities to make more donuts, regardless of the style, from this cookbook and more.

I love planning themed menus. I have made meals for my family ranging everywhere from Caribbean themed (I even decorated with an inflatable palm tree) to authentic Chinese, Indian feasts, and much more. I love pulling from the variety of cookbooks I own, the internet, and my own brain to come up with really fun and creative menus that are cohesive, but also approachable to prepare.

For the dessert course for a French meal I toyed between making soufflés and beignets. Both desserts would require some hands on time at the conclusion of dinner to prep before we could enjoy them. I figured either would be fair game. Beignets can be more New Orleans than French, depending on where you're coming from, but they are French enough for my menu!

Although there is a recipe from beignets in Glazed, Filled, Sugared, and Dipped, I actually found this seasonal recipe for Pumpkin Beignets from the oh-so-exclusive Club 33 at Disneyland, and considering my total Disney obsession, I was 100% on board to whip them up myself! I cut most of them into squares, but a few of them got the Mickey treatment from a cutter I have 🙂

Typically beignets are covered in powdered sugar, making them messy/delicious to eat, but these are a bit fancier and include a recipe for maple glaze to drizzle over the top right before serving! Although my beignets didn't rise a whole lot on their own for some reason (maybe they weren't in a warm enough place?), they definitely puffed up nicely in the oil, which I fully expected and therefore wasn't too worried.

These beignets also were not hollow in the center, as is typical of traditional beignets. I'm not sure if that again is my own fault for having them not rise enough in the first place, or if it's the addition of pumpkin puree which doesn't allow for the air pocket, but regardless they are awesome! Crispy, chewy and perfectly delicious! 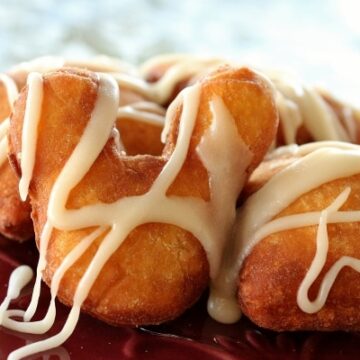 Adapted from Club 33 at Disneyland Park