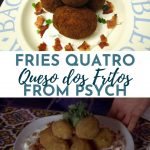 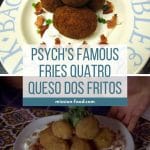 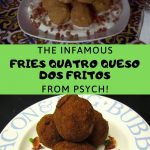 Potatoes are stuffed with cheese and double-fried for this fan-favorite. These are the original Fries Quatro Queso Dos Fritos from Psych featured on Reddit! Perfect for parties and binge-watching the television show.

In one scene, the police question him regarding a murder they suspect him of committing. As protagonists Shawn and Gus look on from behind a two-way mirror, this is how the scene unfolds...

Lyin' Ryan: The night before, I went to this restaurant to get a basket of these things called Fries Quatro Queso Dos Fritos. You know, the ones where they inject potatoes with a four cheese mixture, fry them three quarters of the way, pull them out, batter them, fry them again, and then serve them with bacon and an ancho chili sour cream. Anyway, as I was sitting there, a car speeds right through the storefront across the street. It makes such a loud noise, I had to turn my head and look and that is when I overheard the guy with the curly-Q's on his face tell the other guy at the corner table about the assassination plot.
Shawn: Can this be true?
Gus: No way.
Shawn: I mean, is it even possible?
Gus: I couldn't imagine it.
Shawn: There's no way you can prepare a fry like that. That'd be way too much for the human palate to manage.
Gus: It would be a flavor seizure.

Oh, yes it is possible! Later in the episode, the twosome actually go to the restaurant where Lyin' Ryan ordered these, and try it themselves. Immediately, my friends and I knew we had to make these "Twice Fried Fries with Four Cheeses" ourselves. Although Lyin' Ryan describes these as battered, in the episode they definitely appear to be breaded.

This was likely an oversight by Ryan (who is a compulsive liar anyway), so we will bread ours instead, as it obviously was on the show. In our version we use regular dried bread crumbs, based on the image from the episode, but next time I may try panko instead because it's much crunchier!

We also use cayenne pepper because we didn't have ancho chili powder, but you can use whichever one you have on hand. Shawn, from Psych, suggests trying these with lemon garlic aioli, but we'll let you be the judge of that 🙂 Oh, and P.S., it doesn't travel well! Muahahahahaaa!!

First you'll want to scrub your potatoes clean, lightly score one side with your paring knife, and cut them in half. Use a melon baller or small scoop to hollow out the inside making a pocket for the cheese.

Use the mark you scored on the outside of the potato to line it back up, and adhere the two sides together using a few toothpicks.

Fry the potatoes in batches until tender. This is the first fry in this double-fried recipe. Remove the toothpicks before moving on.

Next create a breading station with flour, beaten eggs, and bread crumbs. Bread the potatoes in that order.

Fry the now breaded potatoes again, and serve atop a pool of bacon and chili sour cream. Viola! This one's a little weak on the cheese. Definitely pack in more for a super cheesy bite!

Well there you have it! Double-fried, quadruple-stuffed fried potatoes à la Pysch, one of the funniest shows no longer on television. If you love creating dishes inspired by television shows and movies (I know I sure do), definitely try these Fries Quatro Queso Dos Fritos. They will be a hit at your next party or Psych marathon.

Looking for other awesome appetizer ideas for your next party? I particularly love these Barceloneta Potato Bombas, yet another fried treat with potato on the outside and in this case a ground meat filling. French Onion Soup Dumplings are also a party favorite, and are smothered in cheese! 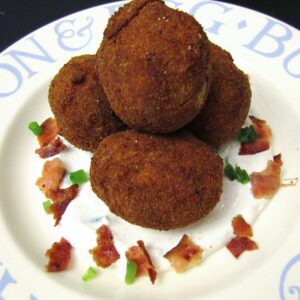