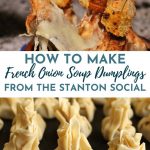 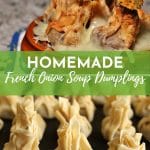 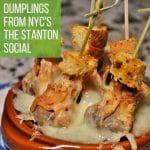 This is the recipe for the beloved French Onion Soup Dumplings from The Stanton Social in NYC. They are the perfect hybrid of French onion soup and fried Asian-style dumplings, all smothered in gooey cheese.

The Stanton Social was a local haunt in the Lower East Side of Manhattan for many years. It recently shuttered, hopefully temporarily until it relocates to another space. For years it was one of my favorite culinary destinations in the Big Apple.

From its sinful craft cocktails to its extraordinarily original shared plates, it was THE place to be. I have many fond and delicious memories that I hope to recreate through chef Chris Santos' sublime cookbook Share.

Arguably the most famous and revered dish on the menu was one of my personal favorites as well. French Onion Soup Dumplings. Let that sink in.

Fried wonton wrappers encase a filling of luxurious melted onions and shallots bound together with a bit of wine and broth. Getting the soup into the dumplings is quite simply the result of freezing and cubing the filling before assembling the little purses of dough.

After deep frying these soup-filled bundles, they are topped with a mound of shredded Gruyère cheese and broiled. A skewered garlicky crouton is the final touch before serving these crowd-pleasing, artery-clogging bites.

Changes from the original

A few notes from my personal experience making these French onion soup dumplings. 1) the original recipe calls for too much butter. Listen, I love butter, but I found that an entire stick of butter was just way too much for the amount of onions.

My final result felt quite greasy around the edges of the pan. It was so much fat that it really felt more like I was frying the onions and shallots. It wasn't allowing them to slowly sweat and caramelize, even with the heat on low.

I have reduced the amount of butter in the recipe below. I even scraped off a bit of the frozen butter that solidified on top of my frozen filling to make up for the excess.

2) Also, I highly recommend reducing the amount of Gruyère cheese from the original recipe. It would be 1 ½ pounds of cheese melted over 36 tiny dumplings. I shredded an entire pound of cheese, and honestly only used 8 ounces to cover all of my dumplings.

I arranged 6 dumplings in an escargot dish. The indentations weren't really large enough for deep enough, it still managed to serve its purpose. Then I used a Pyrex baking dish for the remainder.

You'll need to start the filling at least 6 hours in advance. Begin by melting butter in a large skillet, and then adding sliced onion and shallot.

Cook for about 20 to 30 minutes until golden brown and tender. You'll see in these photos there is a bit too much butter, and it practically fried my onions. I've adjusted the amount in the final recipe to use a bit less.

Add red wine, and reduce until it's almost completely absorbed/evaporated. Then add beef and chicken broths, and cook until reduced by half. Stir in thyme, balsamic vinegar, and seasonings. Set aside to cool.

Meanwhile, line the bottom and sides of a loaf pan with plastic wrap. Pour the cooled onion filling into the pan, and then fold the plastic wrap over to enclose the filling. Freeze until the filling is solid.

Once the filling is solid, remove from the freezer and peel off the plastic wrap. On a cutting board, cut the filling into 36 cubes. Arrange several wonton wrappers on a work surface and place a frozen filling cube on top of each square.

Lightly brush the edges of the wrappers with beaten egg. Bring the edges up and tightly pinch them closed to resemble a parcel. Transfer to a baking sheet and freeze until firm.

When you're ready to serve, heat up a deep fryer, or add oil to a Dutch oven. When the oil is 350 degrees F, add the French onion soup dumplings in batches and fry until golden brown.

Position a rack beneath the broiler, then arrange your fried dumplings either in a buttered escargots dish or in a buttered casserole dish. Cover the dish with shredded Gruyere cheese, and broil until the cheese is melted and bubbly.

Spear a crouton onto a skewer and then piece it onto each French onion soup dumpling. Serve immediately!

Have you ever eaten unusual dumplings like these? If you're a fan of French onion soup I bet you will LOVE these fun and creative appetizers. Leave me a comment if you've tried this recipe, and let me know what you think! 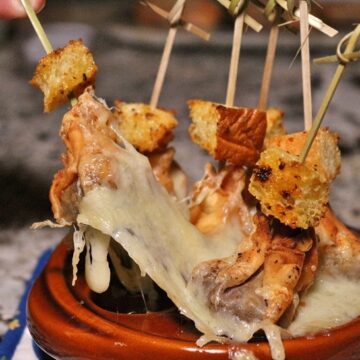