There's nothing quite like the aroma of fresh bread baking in your oven. There really isn't. When it comes to baking bread, there are two major schools of thought. There is bread that can be made rather quickly and efficiently. It doesn't require a starter. It's usually uncomplicated, but can come in many shapes and flavors. It probably features a fairly firm and easy-to-handle bread dough and rises only once before shaping, proofing and baking. It's reliable, and it's a good starter bread for lovers of yeast.

Then there's artisan bread. Artisan bread, by nature, is a wetter dough (the extra water in the dough allows for better texture and more open holes). This can be more of a struggle to work with, knead, and shape. It often (but not always) requires a starter, which thus requires more time to plan your bread making (but improves the flavor tenfold, and is hella easy to make!). In the case of Amy's Bread recipes, it also usually has multiple/slower rise times compared to other bread recipes. None of these obstacles, however, prevent me from wanting to make their bread. Why? Because their bread is the best.

This doesn't mean that I don't/won't make other breads that are easier/faster/less complicated. But it means that I'm happy to spend two days baking bread if it tastes as good as their bread does. This particular recipe suggests refrigerating the dough after the first rise, which extends the total time even longer than some of the other bread recipes in the book. The flavor is supposed to be better if you do, and so I did. I have no complaints.

I made my starter first thing in the morning, then later in the afternoon I prepared my bread dough, let it rise, folded it over, and then refrigerated it until the next morning when I continued to let it rise at room temperature, shaped the loaves, proofed and baked them. It was time consuming, but it wasn't that hard to do. Really.

The bread was fantastic. It had a great herbaceous flavor from the thyme (the recipe originally calls for rosemary, but the thyme in my garden was just aching for some love) and a wonderful aromatic quality from the olive oil, both in the dough and brushed on top. The bread itself had a nice chewy crumb that holds up to many uses.

I actually topped a couple slices of the bread with a quick cherry tomato bruschetta topping I whipped up with cherry tomatoes from the garden. The recipe is simply 1 cup cherry tomatoes, halved, mixed together with ½ a teaspoon each of balsamic vinegar and extra-virgin olive oil, and seasoned with kosher salt and freshly ground black pepper. You could throw some chopped herbs in there, but I wanted to showcase the flavor of the bread (already infused with herbs). 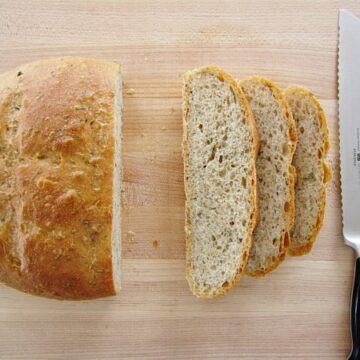 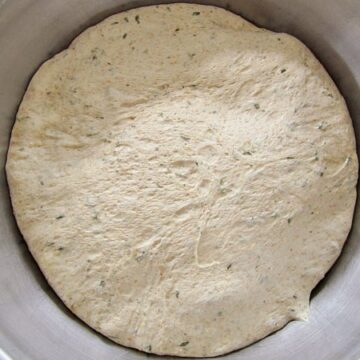 From Amy's Bread: Revised and Updated