This recipe for Pollo a las Rajas comes from the Mexico pavilion in Epcot, specifically from the San Angel Inn, which is located inside the Epcot Mexico pyramid. I've never eaten there, but I've been on the Gran Fiesta Tour river ride that goes through there.

Las Rajas means "cracks" or "splits" in Spanish, and refers to the skin of the roasted poblano chile. This is a recipe that sounds a lot less exciting on paper than it actually is.

Thin strips of poblano chile, red bell pepper, and onions melt together with chunks of chorizo and a slightly tangy sour cream sauce that isn't nearly as rich as it looks or sounds. It's just a really great combination of flavors.

Garlic-kissed chicken breasts top the vegetables, finishing off this rustic dish with a sophisticated edge. Originally, the recipe suggests baking the chicken breasts, but on the menu the chicken is actually grilled. I simply marked my chicken breasts on my grill pan (to give it grill marks) and then finished it off in the oven to cook through.

Also, the original pollo a las rajas recipe wants you to essentially fry the poblano chile in some oil to char the skin so you can peel it. You can save the fat (and effort) by simply grilling or broiling the pepper.

The final change I made was in regard to the cheese. The recipe said to top with Monterey Jack cheese and broil it, but again, the restaurant does not do that. The photographs I've seen show either a naked chicken breast on top, or one topped with uncooked crumbled queso fresca. So that's what I'm including in this version.

I can't wait to make it again! This pollo a las rajas was not only super easy to make (weeknight meal, anyone?) but it was a huge hit! 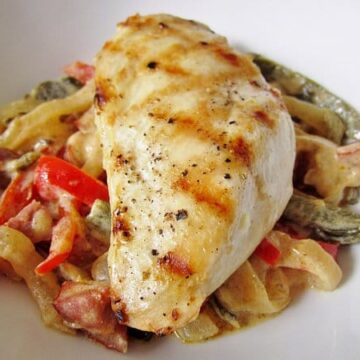 Adapted from Cooking with Mickey and the Disney Chefs