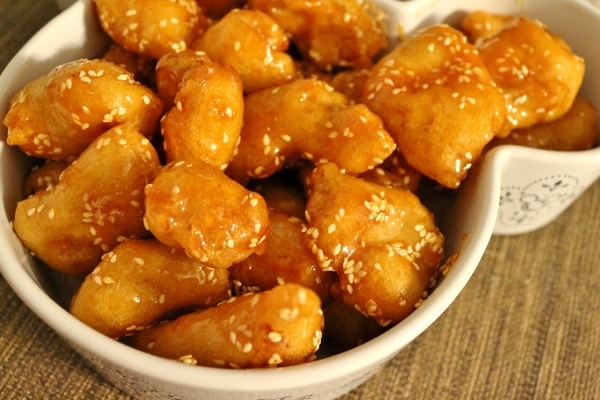 I’m not only a huge fan of the Olympics, but also a big Disney fan.  I love Disney movies, Disney characters, and Disney theme parks like it’s nobody’s business.  When I lived in LA I would take every opportunity to go to Disneyland and would basically have to be dragged kicking and screaming by my friends out of the park once it was closing.  What can I say?  I just can’t get enough Disney 🙂 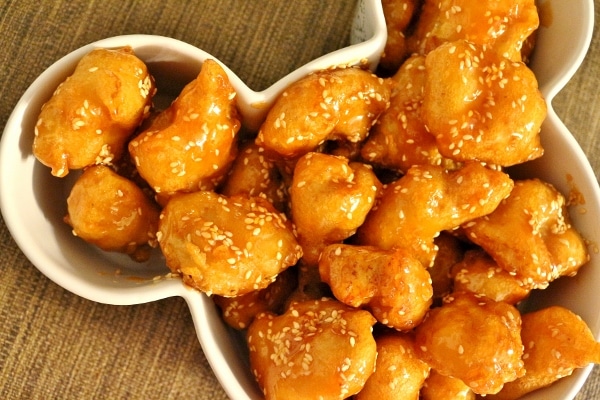 So a few years back I went on a Disney cruise (absolutely one of the best weeks of my life… I highly recommend it if you love Disney, cruises, and tropical destinations.  It’s not only great for families but adults too as they have an adults only pool, restaurant, bars, etc) and purchased a pretty awesome cookbook from the Disney store aboard the ship. 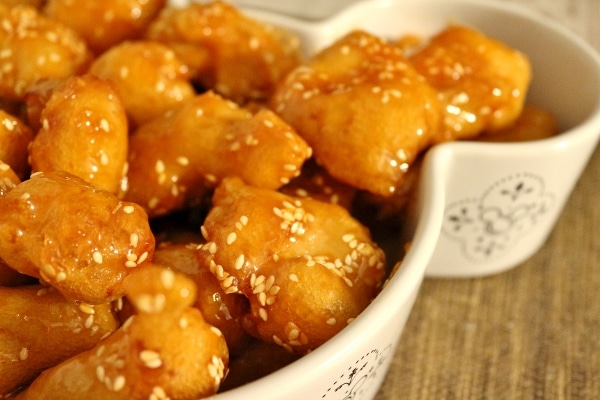 I’ve tried a handful of recipes from this book over the years, but the one recipe I tend to go back to repeatedly is one from the China pavilion in Epcot at Walt Disney World: Honey Sesame Chicken from Nine Dragons Restaurant.  Since I’ve got the whole international food trend going on with the Olympics, I’ve decided to take a little trip to China (in theory) and share this recipe as well (with a few slight adjustments)! 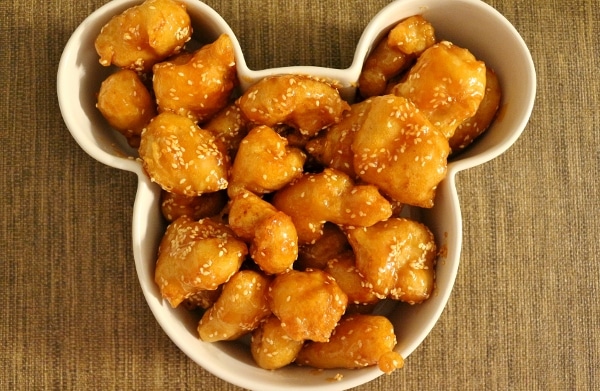 PS I’ve found that by frying the chicken in a non-stick pot, I’ve had better results since the chicken doesn’t stick to the pan when you first drop it in.  Also once they are fried, make sure you keep them in a single layer on a paper towel-lined tray because if you crowd or layer them, the crust will get soggy. 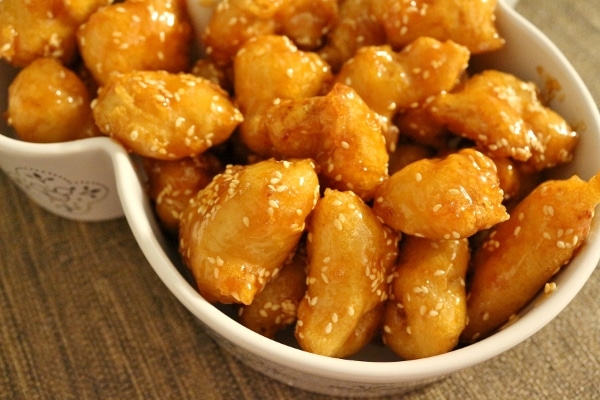 *Note 2/20/15* All photos have been updated. I served this Honey Sesame Chicken in my Mickey casserole dish to make it extra Disney!

Stir the marinade ingredients together in a medium bowl, add the chicken and toss gently to coat.  Let stand for 10 minutes.

For the batter, mix together the flour, cornstarch and baking powder, then add the egg white, water, and oil.  Put mixture aside for 30 minutes.

Meanwhile, make the honey sauce by mixing all ingredients in a bowl and set aside for when the chicken is cooked.

Pour enough oil into a 2-qt saucepan (non-stick works best) to come to a depth of 2 inches.  heat over medium-high heat to 320 degrees F.  Place the chicken pieces into the batter mixture and coat.  Using large tongs or chopsticks, drop chicken pieces into hot oil and fry until golden brown and cooked through, about 2 to 4 minutes, as needed.  Drain in a single layer on paper towels.

Heat the honey sauce mixture in a clean frying pan over medium-high heat, stirring until mixture bubbles (don’t overcook or it will become caramel).  Mix the chicken pieces into sauce and toss with the toasted sesame seeds. Remove from the heat.  Place on a serving dish and serve immediately.