A decadent take on a greens-filled side dish, this Swiss chard gratin features ham and a rich cheesy sauce that will impress your family and friends.

Swiss chard stalks magically come in a variety of colors. Rainbow chard, for example, has a mixture of white, red, and yellow stalks. Ruby chard features red stalks, while most traditional Swiss chard is white-stemmed.

Swiss chard is one of the healthiest greens around. It's high in vitamins A, K, and C and is also high in protein, fiber, and magnesium.

Swiss chard really shrinks down a lot when cooked, so there's a lot in this Swiss chard gratin recipe.

For the record, I left the chard leaves whole (the recipe didn't state anything about cutting them down) to keep some of their structure, but you can easily roughly chop them to make it a bit easier to serve and eat.

The sauce is thick and rich, but not too cheesy. It cloaks the Swiss chard ragout beautifully.

Even after cooking with the vegetables and ham (all of which are notorious for releasing water) the sauce was still thick and had lots of flavor from the onion pique and spices.

I am sold on this Swiss chard gratin. I would definitely make it again and I hope you'll give it a shot next time you want to incorporate more greens into your diet!

Even though this dish contains a slightly rich sauce, it's really not that heavy. You can definitely use low-fat milk as well for the mornay.

It uses the stems AND leaves from the chard (all the vitamins) with some extra protein from the ham and cheese. It's pretty much a complete meal, but also perfect as a side dish 🙂 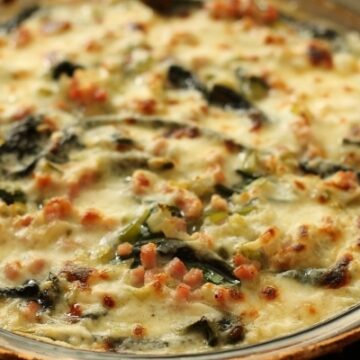 Adapted from I Love NY