Although I no longer consider myself a New Yorker, during my time living there and also visiting the Big Apple in subsequent years I have had the pleasure of dining at The Stanton Social on more than one occasion, noshing on delectable, shareable small plates, and sipping excellent craft cocktails.

Over the years, chef/owner Chris Santos has expanded his New York City dining empire to include two more popular hot spots: Beauty & Essex, and Vandal. I have not yet visited these two, but I hope to someday, and of course The Stanton Social always holds a special place in my heart and stomach.

Their French Onion Soup Dumplings are one of the greatest culinary inventions in recent history. I'm not even exaggerating. They are out of this world. For years they've been on my list of recipes to try and recreate in my own kitchen, but I haven't quite gotten around to it.

Imagine my elation when I discovered that Santos would be releasing a cookbook including all of these wonderful and beloved recipes! Back in early February Share: Delicious and Surprising Recipes to Pass Around Your Table hit bookshelves. It contains recipes from all three of his establishments, ranging from cocktails to breakfast items.

My "wish list" of recipes I would like to try is extensive, and probably includes the majority of recipes within the book. I've actually made a list. It's long. While many of the recipes are for small bites of food perfect for sharing (hence the whole mantra of the cookbook), there are other shareable recipes that are much more entree-like in style.

A perfect example of this is the Mac 'n' Cheese with Chorizo and Poblanos. I am an avid fan of macaroni and cheese, and the various versions I make are some of my favorites. While I love my recipes for this comfort food, I'm always happy to try new ones, and the version in this book is very enticing.

The cheese sauce is a bit different from the typical norm. It begins with a combination of canned evaporated milk, regular milk, and heavy cream brought just to a boil and then whisked together with three kinds of cheese. No roux here. The richness and thickness of the evaporated milk and the decadence of all the cheeses is plenty to creates a luscious and gooey cheese sauce.

Chorizo sausage infuses its smoky quality to the entire dish, while chopped roasted poblanos add a hint more spice. The dish is finished with an herbed bread crumb topping featuring crunchy panko, a touch more of Gruyère cheese, and chopped herbs for a bit of color.

I recently made this dish for my nephew's birthday party and the general consensus was "Oh my God, I need this recipe!" This is not your typical mac and cheese, it's definitely elevated for an adult palate, but it couldn't be easier to make (like I said, no need to even make a roux!).

I baked it in two smaller casserole dishes so we could set one at each end of the table for our large gathering, but you can definitely follow the recipe as is and bake it in one larger baking dish. 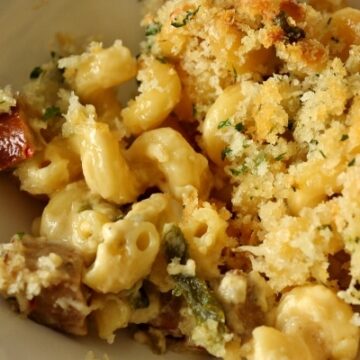 Evaporated milk has a richer flavor than fresh milk, although you can use the latter if you don’t happen to have canned on hand. In that case, I’d use 1 ½ cups fresh whole milk and ½ cup heavy cream. Adapted from Share