I have never shied away from a cooking challenge. The more complex or time-consuming, the more intrigued I typically am to attack said challenge and conquer it. For years I've been planning to try my hand at making a traditional Mexican mole. I've enjoyed it at Mexican restaurants slathered on my enchiladas, and I knew of its reputation as being a laborious process.

Moles come in many shapes and forms, although mole poblano is perhaps Mexico's most famous dish. It features an incredible balance of savory and sweet with profound complexity and richness. This sauce requires a lot of stirring and patience. Nearly every ingredient is cooked individually and then combined in steps.

Spiciness from the dried chiles and sweetness from the chocolate are only two of many unique characteristics in this kitchen-sink style sauce. I sometimes wonder how one decided to combine such eclectic ingredients together to yield something so prized in Mexican cuisine.

The morning of my mole expedition, I butchered two beautiful chickens. I reserved the wings, thighs, and drumsticks for my Korean fried chicken, which was on the menu later that weekend, and then simmered the wing tips, backbones, and breasts with some onion, carrot, bay leaves, peppercorns, parsley stems, salt, and water to make chicken stock.

I reserved the breast meat, which I shredded, to become the filling for my Mole poblano enchiladas (or enmoladas), and used a good part of my fresh, homemade chicken stock in the actual mole. Talk about utilizing every part of the chicken! That's really the way it should be done. No shortcuts here 🙂

Meanwhile, I prepared my mise en place (literally translates to "putting in place" in French) for the mole poblano. Good prep work is paramount in successful cooking especially when faced with such a complex product as mole poblano.

Then, slowly but surely, I spent the next 4 or 5 hours (honestly, I didn't keep good track of my time) working on the mole. It's a slow process, but not a difficult one. You begin by toasting the chiles, then soaking them in hot water before draining and pureeing them.

After FINALLY reaching the home stretch of this labor of love, the sauce is processed through a food mill to ensure the absolute smoothest, velvety texture.

Now, how does one utilize this liquid gold? Well, the most traditional serving method is spooned over boiled chicken and topped with toasted sesame seeds. It's also frequently used as a sauce for enchiladas, which is my personal favorite. I gently warmed corn tortillas and filled them with my shredded chicken, which I had mixed with some of the mole. I then spooned more mole over the tops of the enchiladas and finished with some queso fresco before popping the baking dish into the oven at 350 degrees for about 20 minutes or so until heated through.

This recipe makes a lot of mole, and I highly encourage you to freeze some of it in smaller quantities so you can defrost and use it for various future occasions and cravings. I personally like to freeze my chicken stock the same way, in a silicone muffin pan where each frozen disc yields ¼ cup. That way I can count out how many ¼ cup portions I require, and defrost exactly that much.

In any case, I'm thrilled to finally have had this opportunity to check homemade mole poblano off my cooking bucket list. I hope you're not discouraged by the lengthy process. If you're a fan of mole, this recipe is absolutely spot on! 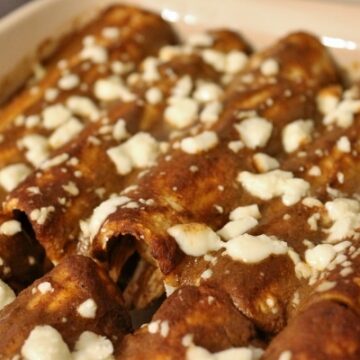 Note: To make the mole less spicy, discard the chile soaking liquid and substitute 3 more cups of chicken stock (this is what I did, just to be safe, and thought the result was slightly spicy, but very flavorful). Serving Ideas: This mole is traditionally served with simmered or roasted turkey pieces, corn tortillas, and plain white rice. Adapted from Salsas and Moles