January 21, 2015 (Last Updated: March 14, 2020)
This post may contain affiliate links, which means that I may receive a commission if you make a purchase using these links. As an Amazon Associate I earn from qualifying purchases.
1shares
Jump to Recipe Print Recipe

The most common dumpling filling among typical Chinese restaurants (and even other Asian restaurants) is pork. You’ll find some variation of pork dumplings (steamed or fried) on many Chinese menus, whether they are traditional or American-Chinese style restaurants. Although some may contain just pork and seasonings, it’s likely that many of them also contain some cabbage and/or Chinese chives.

I’ve created a huge selection of both traditional and creative dumplings over my years of dumpling obsession, but today I will be kicking it old school and sharing a very traditional pork and cabbage dumpling recipe. All of my Chinese/dumpling/dim sum cookbooks have some variation of this recipe, and they are nearly identical in many ways.

I recently made a batch of the pork and cabbage dumplings featured in Asian Dumplings (as well as a batch of the amazing vegetable dumplings from the same cookbook–PS I just updated the photos on that post with new ones!). These dumplings are super easy to make. At first I was worried the cabbage wouldn’t wilt enough in the filling (my first adventure with dumpling-making MANY years ago resulted in that problem).

The cabbage wilted a bit during the salting step, but it continued to soften once I added the flavoring sauce, and even more when I allowed the filling to rest overnight in the fridge. I did end up with perhaps an extra 1/2 to 3/4 cup filling (same goes with the veggie filling) and I just froze the extra fillings in freezer bags to use another time. I also froze about half of each variety of dumplings for convenient snacks/meals when an inevitable dumpling craving hits. 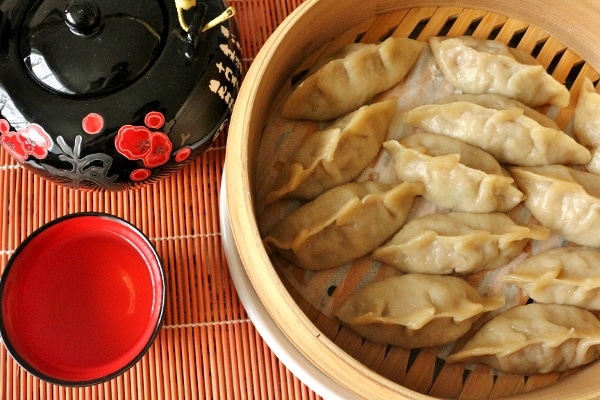